The reason why I have not been posting this past week is because of a transition in jobs.  I still am employed at the same place I've worked for the last thirteen plus years, but have been asked to take back some older responsibilities.  The adjustment isn't all that bad, I just needed a refresher course in a few things, plus I have to learn new things, but it's nothing I can't handle.  It beats the alternative, although I'm getting the feeling...no, I won't go there.  Anyway, the new work also means I get to leave work earlier.  So I'm posting now.

I have been online and have seen that auctions have shown up on the Bay for 2012 Topps S1, and all the goodies that are included within.  One thing I have noticed though is that the legendary SP's have seemed to nowhere in sight.  There will still be short-printed cards in Series 1, but instead of legends, Topps is returning to variation cards of current players in limited quantities.  And it seems that the SP's can be grouped in a few categories:  (hopefully playful) fights with mascots, frivolity in the dugout, or celebrations (think Pie in the Face from 2010).

To wit, here are the 20 SP cards (not including the already known Pujols and Reyes cards): 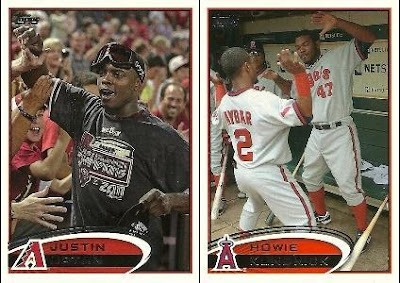 Now I like the cards.  They show the lighter side of the game, with many happy moments being shared with players and their teammates.  But, just like other variation cards (see 2007 Topps), I'm not really interested in collecting them.  I'll already have each player's regular card, I won't really need the variation.  But that won't mean that I'll be disappointed if I get one (I'll be ecstatic).  But don't expect me to put these in my wantlist on the side bar.  And at least we have a clue as to what number (possibly...there has been a sense of discontinuity with these things) a player will get in series 2 (see #400, 411, 421, 450, and 470).

And I was hoping for a 2012 card of Roberto Clemente or Willie Mays.  Maybe in series 2.  You never know.

Series 1 is (supposed) to arrive in stores tomorrow.  Are you ready?

JayBee Anama
Posted by James B. Anama at 5:58 PM

They'll probably be so scarce, I'll only read about them. And someone in rural Nebraska will open an entire blaster full of them to ensure their ridiculous rarity...

They're already in stores! (Though not in my area).

I'm usually pretty positive about Topps regular series issues, but this year I may not get any. The subsets don't thrill me like in past years (Cards Your Mom Threw Out, Lost Cards, Bonds MVP), no legends SP's and even the regular issue Mantle #7 is a colored photo. Pretty disapointed to say the least. I'll just see what Heritage and Topps Archives have to offer and that'll be it.

20 SP's and THREE of them are Royals??? I'll probably have to track those down. Billy Butler most of all.

Thanks for showing the pics of those.