A few weeks back, I mentioned the MLB Network and Topps' joint promotion called Prime 9.  To review, check here.  If you don't want to click on the link and want a cliff notes version of the premise and rules of this promotion, here goes:

Starting July 18, the MLB Network will announce the Prime 9 subject for the week. Ideally, the identities of the subjects being chosen will be kept a secret until the announcement. The subject could be an active player, could be a legend, nobody knows for sure. But the key is that there will be one player per position!!!

Now collectors with these cards can bring the cards, after each announcement is made of course, to their nearby HTA store and the store, if participating properly, will reward him or her with a Prime 9 chrome refractor card. Each card that is submitted will enroll collectors in a sweepstakes. The grand prizes (2 of them) include either a trip to the World Series, or a trip to the MLB Network to meet and greet the talent. Other prizes will be announced later.

Emphasis on the words "if participating properly."  Because the cards were shipped to the HTA stores this week.  And guess what showed up on the 'Bay not soon afterwards: 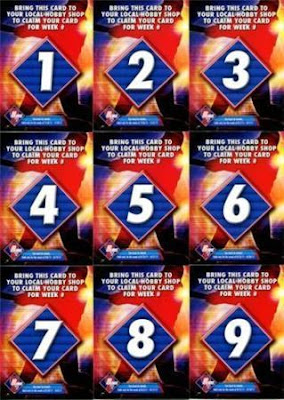 
There goes the surprise. (Picture from one of the handful of auctions found on the Bay).

I think it would have been a better idea to have these cards redeemed online (like the Red Hot Rookie promotion from the last three years) instead of having them redeemed at the local HTA store.  Because if you're expecting people in the Hobby to keep things secret, that will never, ever happen.  Not with the Internet anyway.

Now that the element of surprise is gone...at least the player selection is good.  Can't go wrong with a 1-9 lineup like what you see above.

Email ThisBlogThis!Share to TwitterShare to FacebookShare to Pinterest
Labels: 2011, my apologies, prime 9, topps, WHAT?

I think dealers were shipped a poster that shows all nine of the cards too, which ruins any of the surprise that would come from people who are internet-less. Nice player selection, but two Dodgers and two Yankees? (And no Babe Ruth this time?)

If Topps was serious about this stuff, they'd track the seller down and ensure distributors stop selling to them. I'm sure you could do it unless they started up an ebay account just to sell those cards.

Is there a list anywhere that shows all the HTA shops? If so, if I went into a shop with one of those cards, and they weren't "participating as intended" - could I call Topps and report them?