I received an e-mail from Friend of the Blog Philip Melita regarding his thoughts on 2012 Topps. Specifically:

"OK, so the duplicate “3B” seems to be an honest Microsoft Excel mistake, but what’s with the “W” instead of “BB” for both hitters and pitchers? Now pitchers have two “W” columns on the back, one for Wins and one for Walks. I understand the Walks are near the Strikeouts, but it still strikes me as unnecessarily confusing. And “SP” for “SLG” and “S” for “SV” were a bit jarring as well."

Agreed. It may have been mentioned in many blogs about the dissatisfaction with the inconsistent stat headers. Why did Topps decide to change these now? Although it would not be the first time The Company has done this, having two stat headers under W (for both Wins and Walks) can be confusing at first glance. Funny though, that the RC pitchers still have the BB header for Walks. Personally, I don't think they should have changed these in the first place. And maybe, just maybe, this will be corrected in Series 2 and beyond. But this would be one of the few things that would make me wonder "What??!" (as in "What Was Topps Thinking??!")

He also happened to mention that MLB.com has their annual fantasy player reviews up on their site. And once again, each player's bio comes with a picture in the guise of a baseball card. This time, MLB pays tribue...kinda...to 1986 Topps. You'll see what I mean in a minute.

I've written about these before. So here's a quick review (I tried to go back and find older fantasy previews, but I could only go as far back as 2008:

This was last year's (2011) player profile pilfered from MLB.com's fantasy review. It looks like an homage to 1983 Topps Baseball...except 1983 Topps used round frames for the headshot on the corner, not square ones as in the above example.

And so did the preview from 2007. But notice how the cards are "aged?" The bent corners and the weather worn borders?

For 2006, it's the 1985 design. The actual pictures were not appearing when I was first digging around for the site. It showed the design, but no picture (guess you should use your imagination). Upon hitting the link this year, it hasn't changed.

And here is the preview snapshot for 2005. They brought us all the way back to 1976 with this one. What's cool is that when you click on the position, the drawing of the player on the bottom left of the card appears above the position list.

Here is a snapshot of what you will see when you click on this year's analysis:

It's the right idea. You have the black and white borders that are iconic of 1986 Topps. The team name lettering is a bit small (and just white on everybody) but it looks close to what a 1986 card looks like (the player name? Way off!) The position? Totally off thanks to the square floating inside the picture instead of a circle. Otherwise, it's a virtual baseball card. 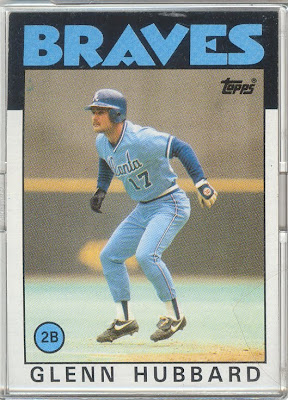 See, this is what a 1986 Topps Baseball Card is supposed to look like. You'd like to think that if Topps is the exclusive MLB card that there would be no problem with MLB using their designs.

I said it before, and I'll say it again.  Baseball cards were the fantasy preview magazines BEFORE there were such things. The cards had stats, a brief bio, a clear picture of the player (in many cases anyway), and it was all contained in a portable 2½" x 3½" piece of cardboard. Of course, thanks to magazines and the Internet, the cards are no longer used as a primary resource. But they're still around, and thanks to MLB.com, baseball cards still serve a purpose.

Interestingly, I do see a circle around the position on the "1986" Fantasy previews -- I wonder if it depends on the browser? (I'm using Firefox.)

They look like they could be UD designed OPC rejects.