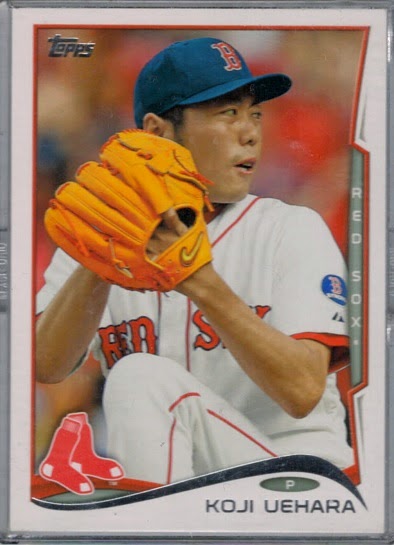 On Sunday, Masahiro Tanaka, the biggest name in the free agent market during the offseason, was named to the AL All-Star team. However, because he was in line to pitch on Sunday, he would have to be replaced by another due to the "No Sunday Starters" rule. Well, the good news is that he won't be pitching on Sunday after all. The bad news is that he was just placed on the 15 Day DL due to inflammation in his right elbow. While he's recuperating, fellow countryman, and Boston Red Sox closer Koji Uehara was named as his replacement by AL Manager John Farrell and MLB.

Uehara has earned a 4-2 record, a nice 1.30 ERA, and 18 saves in 40 appearances. He also has struck out 52 batters in 41.2 innings of work. He was an eight-time All-Star in Japan, and this is the first time he's been named an All-Star in MLB. He joins fellow pitcher Jon Lester on the AL squad.

Stay tuned as this humble, little blog switches gears to All-Star Game roster information, along with relevant Topps card numbers for your All-Star binder (please tell me I'm not the only one who's doing this).

JayBee Anama
Posted by James B. Anama at 6:06 PM