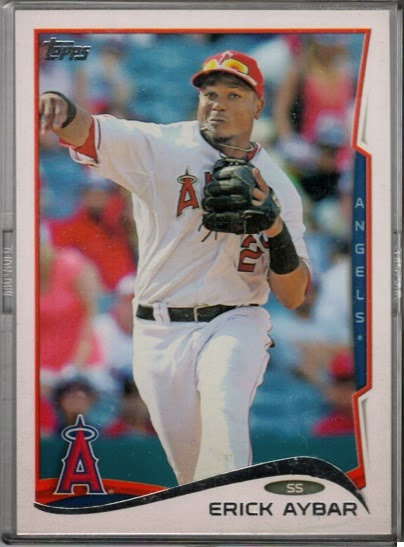 While baseball fans around the world were busy voting, tweeting, and hash-tagging on the last day of Final Man voting (I'll get to this in a separate post), Alex Gordon of the Royals sprained his right wrist. While he is not being placed on the 15-Day DL, it has been decided that he will not participate in the All-Star Game, as well as not playing in a key 4-game series against the divisional rival Tigers. Taking his spot on the All-Star team is Angels' shortstop Erick Aybar.

Coming into today's action, Aybar is hitting at a .282 clip, with 6 home runs, 48 rbi's (which leads AL shortstops), 11 stolen bases, and percentages of .319/.415/.714. The long-time Angel shortstop makes his first trip to the All-Star Game, is the first Halo's shortstop since Gary DiSarcina (1995), the fourth Dominican-born Angels All-Star (Ervin Santana, Bartolo Colon, and Vladimir Guerrero the others), and will join fellow Angel Mike Trout in Minneapolis.

For those keeping up their All-Star binders, Aybar's eponymous Topps card is #369, and his retail team set card is #LAA14.

More news to come, especially since Yadier Molina of the Cardinals will now be out for 8-12 weeks.