And thewritersjourney Comes Up With the Answer...

Enclosed is a picture from an auction from the Bay. These are cards MM1-MM5 in the now confirmed 10-card Mickey Mouse All-Star Game set: 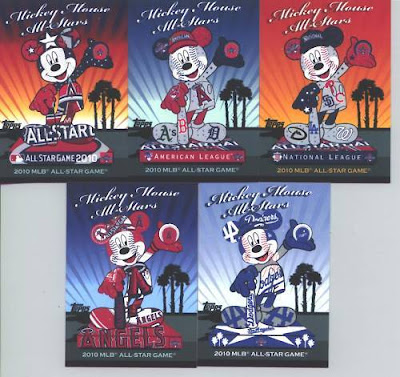 The auction goes on to say that these five cards came from a wrapper redemption at the 2010 FanFest. The cards are of:


This now wraps up the mystery. Thanks to thewritersjourney for the quick response. The above auction has about 11 hours to go before it ends. And with more of the other five cards now appearing on the Bay, why not complete a full set by winning both auctions. And then contact me if you wind up with all ten cards. Only because my daughter saw them and said she was interested in the whole set...not just the five cards.

That's my girl. She's got the completist mentality as well. A partial set is not good enough...she wants them all!!!