This is going to be the first of a series of posts that I meant to put on the blog this past month, but for one reason or another (sheer laziness, vacation, busy at work, you get the idea), I wasn't able either to post it on time, or just didn't do it until now. In the mean time, please pretend that this post was created on July 2, 2010. Thanks. jba

Okay, I have finally finished simulating the All-Star Games using my 2009 End of Year All-Star Teams. And, just as it has been in real life, both teams were evenly matched. So much so that the game itself went into extra innings (the third time this has happened since 2002) going into the 11th inning of play. Fortunately, I am not bound by restrictions for using players like in real life, and I think all but one player got into this game.

So the AL wins the series 4-3, snapping the NL's six series winning streak. The overall record in the 23 series that I've simulated, the NL has a 13-10 lead over their AL rivals. The seventh series, in which the simulator picks the lineups and the rotations, ideally would give us an idea as to who would win the ASG. In the 23 seventh series that I've run, the NL also has a 13-10 lead. However, up to this point, the team that wins the final set has won the one-game ASG 14 times (out of 22 for a 63.6% accuracy rate). With the AL winning the series and the 7th game, can they win the ASG?

For the official All-Star Game, I decided to just simulate one game and one game only. The starting pitchers were Wainwright and Hernandez and I let them pitch two innings (unless they struggled badly). The rest of the pitchers would get one inning each (unless they struggled badly). The position players were replaced every three innings. The DH's (Pablo Sandoval of the NL and Adam Lind of the AL) were never replaced.

The starting lineups, first for the National League (I'm using 2010 Topps cards because these are the cards I used to represent the players on my All-Star teams): 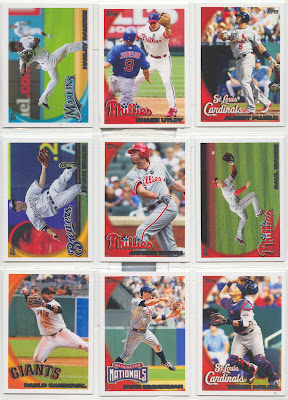 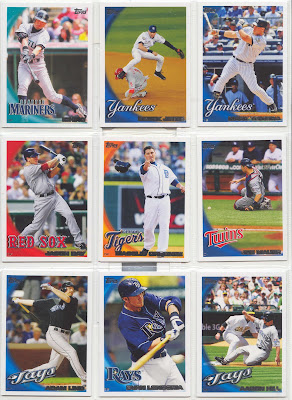 The 2009 NL All-Stars beat the 2009 AL All-Stars by a final score of 5-3 in eleven innings. While the pitching was dominant at times, it was a pair of clutch home runs that brought the game into extra innings, and eventually won it for the National League. 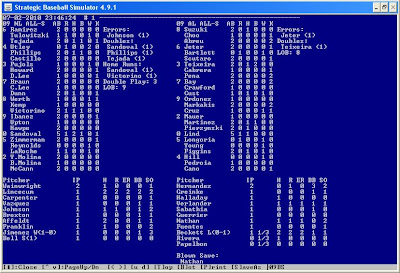 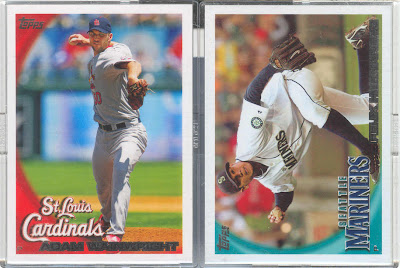 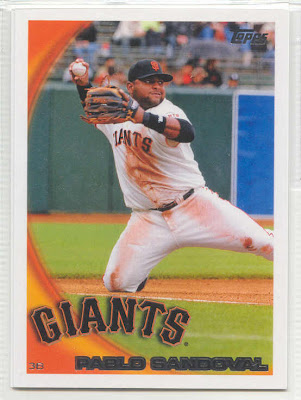 The MVP for the 2009 All-Star Game is Pablo Sandoval.
If this game actually existed, the nominees for the MVP award would have been Pablo Sandoval (2-5, 1 hr, game winning home run). Ubaldo Jimenez takes the extra-inning win in relief, Josh Beckett suffers the loss, Heath Bell picks up the save in the bottom of the 11th, and the only player who didn't get in the game was pitcher Francisco Cordero of the NL. 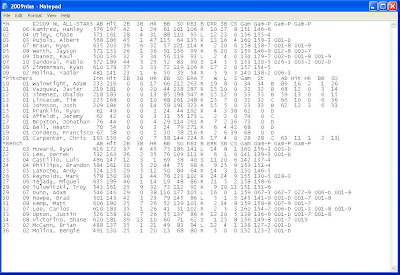 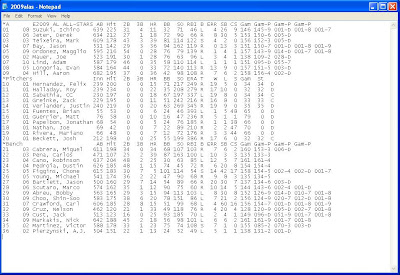 Now that the 2009 All-Star Games are officially over, this now concludes the introduction of bdj610's All-Star teams. It has been an incredible journey to share what was once a 12 year old's fantasy and make it a reality 23 years later. Putting these teams online has allowed me to rediscover my old notes and allowed me to transfer my rosters from an old Apple computer to an online setting. I want to thank the staff at Strategic Baseball Simulator for helping me figure out how to properly use the simulator and for the years of statistics used to compile the rosters for each set of simulations. And going forward, as I continue to name my All-Star teams (the 2010 teams will be named as soon as the season ends...whenever that may be), I will also use the simulator to determine which league would win an imagined All-Star Game.

I think the next step is to do a tournament, using these 23 pairs of teams (and of course the teams that will be determined for this year...24 pairs total) to determine the best of the best. I have an idea how to accomplish this, but it will take some manipulation (and possibly adding extra players to level the playing field in some cases), to see if this can be done. Thank you for reading.