If This is His Topps Card, Then What Card is This?: Eric Hinske

I can't believe I forgot about this last weekend. Where is my head? Anyway, to make up for it, I hope that this week's What Card is This? is a bit more challenging.

This week's subject was the 2002 American League Rookie of the Year. In his four years with the Toronto Blue Jays, he was sent to different positions when upper management decided to bring in other players via free agency. Regardless of where he was assigned, he was always ready to play. And with the Blue Jays luck (or lack of it in many cases), there was always a place for him in the lineup. He can also lay claim to the fact that he reached the World Series in consecutive years with two different teams. He was part of the 2007 World Champion Boston Red Sox, and also a member of the 2008 AL Champion Tampa Bay Rays. This week, our subject is Eric Hinske.

Thanks to his stellar rookie season (.279, 24 HR's, 84 RBI's), major league managers had no problem voting him in as the third baseman for the 2002 Topps All-Star Rookie team. That meant that his 2003 Topps cards, the ones with the easily chippable blue borders, would include the prestigious rookie cup. So let's get to it shall we? Here is his 2003 Topps #40 card: 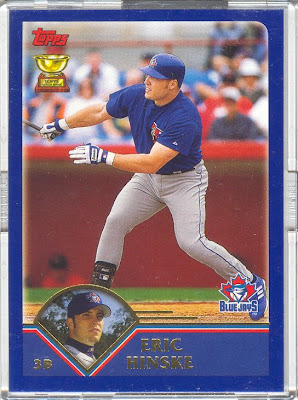 This card looks really good. These solid blue borders make any player from the Blue Jays, or for that matter, any team whose primary color is blue (like the Cubs, Dodgers, Royals) a work of art. And this one is no exception. The picture is nice and clear, and shows Eric on his follow through to first, as if the ball is about to drop in front of the outfielder for a hit. Done looking yet? Here's card #2: 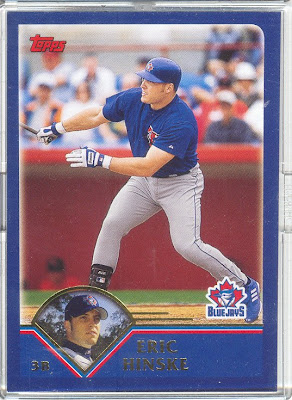 I know what you're thinking. "It's the same card." "What kind of trick is this?" I can assure you that this is no trick. The above card is an actual card. Now before you get the pitchforks and torches out, just take a good look at card number 2. Do you notice anything? Anything at all? Is there something amiss? Can you figure it out? I'll give you a hint. I've mentioned it throughout the post.

What Card is This???
Just to let you know, I did not remove anything from card number two. This is a real card. But now it's up to you to figure out what set this card is from. Good luck.

I thought that this would be a challenge. But the guy over at Stale Gum got the right answer. Yes, the second Hinske card comes from the 2005 (or is it 2006, I never could figure it out) Topps Rookie Cup set. If you are not familiar with this obscure set, it was Topps' way to cash in on all those collectors who seriously collect the players who make this team, specifically, the ones with the trophy on it. Now for a set devoted to the ASR team, I found it quite ridiculous that Topps failed to include the darn rookie cup in the reprint. And quite frankly, I didn't even know the guy (Chris) actually reads my blog.

On another note, friend of the blog tdlindgren (please check out his blogin effort...it's good reading) said that this card could be it's own What??! topic. Frankly, many cards in the 150-card reprint set could be a What??! topic. Why???

I love the set. I really do, and as of now, of the ten "prospects" they added (possible future ASR rookie team members), they got one right. Troy Tulowitzki was included as a short printed autograph card. And he did wind up winning the award in 2007. It remains to be seen what happens to the nine other guys (although I think Yunel Escobar has now missed his opportunity as he is no longer a rookie). jba

Email ThisBlogThis!Share to TwitterShare to FacebookShare to Pinterest
Labels: 2003, topps, What Card is This?

It's a reprint from '05 Topps Rookie Cup.

It's interesting why they wouldn't put the rookie cup logo on a card reprinted for the Rookie Cup set. That could also be a Topps "What Were They Thinking" entry. What do you think JayBee?

Hello there,
I am Peter Robert Casey and I am a basketball columnist. I have initiated an idea to create a sports blogroll where bloggers from all sports disciplines could participate. All you need to do is to add my blog link to your blog and i'll do the same. That way, we could have a mutual partnership and we could refer visitors to each other's blog.
Please let me know if you would be interested.