Welcome to the Majors, Joe Ortiz.

As the official 2013 MLB Season has been underway for the last two days, I thought it would be a nice gesture (since I have run MLB Debut posts at the end of the year for the last four years now) to recognize the first player to make his MLB debut for this championship season. That honor was bestowed to Joe Ortiz of the Texas Rangers. 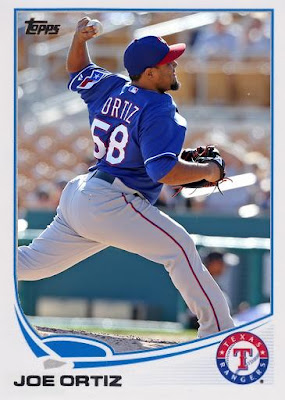 Ortiz was summoned to pitch in the bottom of the eighth inning of the game in which the Astros were leading 7-2 and had their 4-5-6 hitters come to the plate.  He struck out Carlos Peña on five pitches, but then gave up a triple to Justin Maxwell. After inducing Jason Castro to ground out to Ian Kinsler (4-3), Matt Dominguez hit a single up the middle, scoring Maxwell. Ortiz then proceeded to strikeout Rick Ankiel.

Welcome to the Majors, Joe Ortiz.

Now I am not going to be doing these posts for EVERY player who makes his MLB debut (no way do I have time to make cards for every debutante), but I thought it would be nice to feature the guy who made the first debut of the 2013 campaign. I am looking forward to seeing how he, and the rest of the debuting players, do during the season.