Not only do I enjoy reading blogs and twitter feeds (you can follow me @bdj610), but I am on Facebook as well. I don't know how, I'm guessing probably because I am a Hobby blogger, but I've been added to a lot of sports card trading groups. I guess these trading groups have replaced the old Hobby message boards (yes, there are still a lot of them out there, but each cater to their own loyal members).

These guys are crazy serious when it comes to trading and selling. Some of the mods are sticklers to the rules and if you don't follow them to the letter, your posts get deleted and you may be banned. Now although I don't do a lot of trading (send your wantlists...seriously), I do try to answer questions about cards if I can. There was a big discussion lately about why Bip Roberts was included in 2015 Stadium Club. Apparently, not too many of these Facebook guys understand the significance of Bip in the Hobby Blogging Community.

Anyway, many of these people post pictures of cards that they have for trade or for sale. Not too many grab my attention. But this one caught my eye. It made me stop what I was doing and just stare. 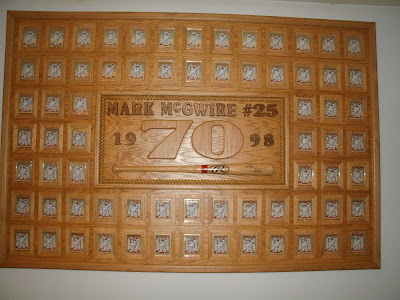 Yes, ladies and gentlemen, feast your eyes on a complete set of 1999 Topps Mark McGwire Home Run Record #220 cards. All 70 cards are individually framed in a beautiful, hand-crafted oak and walnut display that measures in at 24 square feet (6 feet x 4 feet). Each card, in order, surrounds a centerpiece with the year the record was broken, McGwire's name and uniform number, and a large number "70," complete with a Rawlings bat.

Enjoy the rest of these pictures: 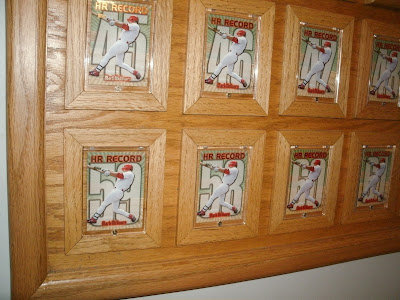 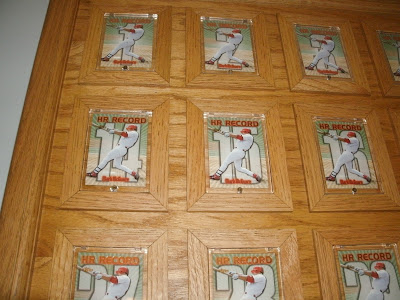 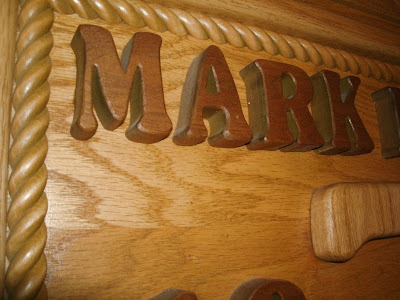 I had to ask the person who posted this for sale about the history of the piece.

The gentleman who is putting this item up for sale is Perry Chaney. While he didn't build the piece, he did give me the background story about how it was made. "A guy in Chicago built it. Took him 4 months. He spent $2300 on the cards in 09 (they were expensive back then). I don't know how long it took him to find the cards but had to have been awhile...When I bought it, I was regretting the purchase the whole 3 hour drive. When I seen it, my jaw hit the floor."

Quite frankly, so did mine. "The size and little details were unexpected," Chaney says. 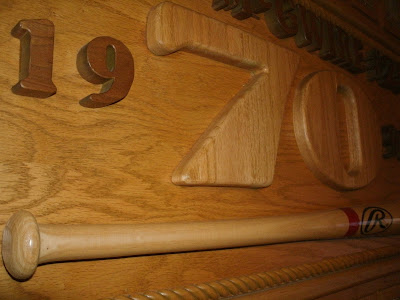 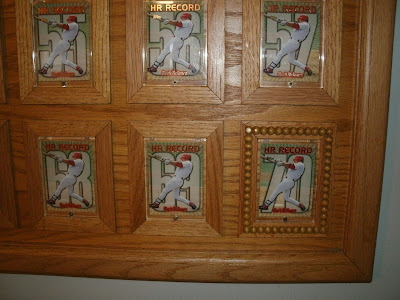 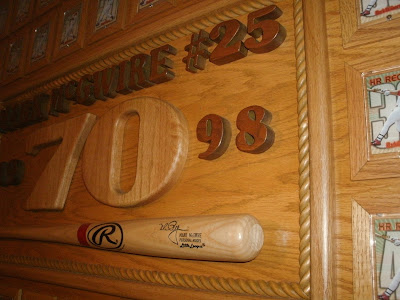 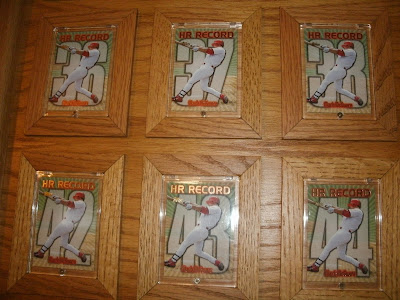 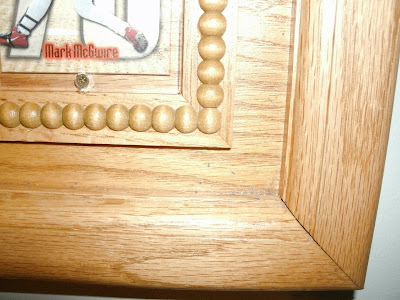 Chaney is selling this incredible display, cards and all for $750.00. "The set alone would cost $600+ to put together," he says. Add the cost of the woodwork involved, and $750 looks to be a bargain.

For serious Mark McGwire collectors, this would be the penultimate piece for your collection. What better way to show your appreciation for the man who broke a record that was once thought to be impossible to break. Regardless of how you feel about the man and the feat, what Mark McGwire did in 1998 "saved baseball, so that was his (the gentleman who built this masterpiece) inspiration," concludes Chaney. Controversy aside, this is just an incredible piece of work, and if I had the money, I'd probably spend on it (but then I'd be insane enough to take the cards out and put them in my 1999 Topps binder).

If you have any questions about the piece, Perry Chaney can be reached via email (perry.chaney@gmail.com). More pictures can be found on Facebook, but you'd have to be a member of the closed Facebook group called Baseball Cards Rule to see it.

And before you question how much of a collector Chaney is, "I am one of only 3 people on the psa set registry with all 5 set variations in a average grade of 9.57." Now, I'm not a graded card aficionado, but that's one serious collection.

That's an incredible display! Thanks for sharing.

Homers 58 and 59 happened in the same game, one in the seventh inning and one in the eighth. Maybe Topps reversed them, and this puts them in the right order? Without being able to see the backs, it's hard to say.

This to me is a 1/1 Item and is worth far more than the seller is asking, I think the asking price is very reasonable, I think ebay would be a better place for it or better yet a private auctioneer, this is a incredible piece of work.

Very well done, the thing is finding that serious collector Beckett.com Ebay.com & Facebook are great places to start. This is a 1/1 for any serious Mark McGwire collector.