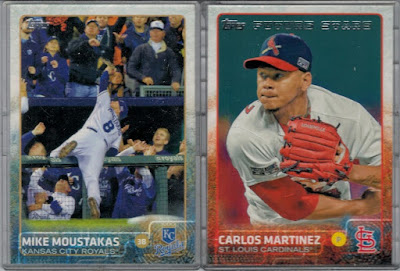 Missouri's presence at this year's All-Star Game has increased by 2.

An incredible 111.8 million votes were tallied after the Final Man candidates were announced on Monday. Alliances were made, one guy was even taken off the balloting when he was added to the team. When all was said and done, it was the #VoteMo pairing of Royals third baseman Mike Moustakas and starting pitcher Carlos Martinez of the Cardinals that won the Final Man Voting and have been added to their respective All-Star Teams.

Mike Moustakas, who was leading in the All-Star voting until the very last week, led the balloting from the very beginning, received 19.3 million votes, earning more votes than second baseman Brian Dozier of the Twins, outfielder Yoenis Cespedes of the Tigers, and shortstop Xander Bogaerts of the Red Sox.

Moustakas, a first-time All-Star, is the seventh Royal player to be named to the All-Star Team and the first to win the Final Man Ballot. He joins a strong contingent of KC players, including Lorenzo Cain, Wade Davis, Alcides Escobar, Alex Gordon, Kelvin Herrera, and Salvador Perez.

Martinez, also a first-time All-Star, is the second Cardinals player to win the Final Man Ballot (David Freese-2012), and now the sixth Cardinal to be named onto the NL All-Star Team, joining Matt Holliday, Yadier Molina, Jhonny Peralta, Trevor Rosenthal, and Michael Wacha as the St. Louis reps in the Queen City.

Both Missouri teams have the best records in their respective leagues. The state has become the hotbed of baseball in 2015 and will be proudly represented as the game's best meet this coming Tuesday.

JayBee Anama
Posted by James B. Anama at 9:51 PM