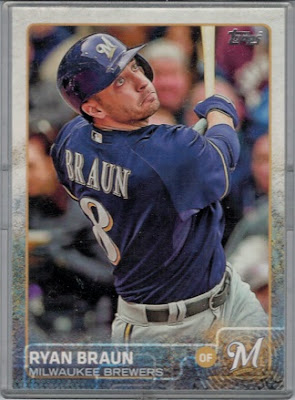 When Matt Holliday of the Cardinals was voted as one of the starting outfielders for the 2015 MLB All-Star Game, he was on the team's disabled list with a strained right quadriceps muscle. Although he was slated to return some time this past week, Cardinals' staff decided to hold off on his return until after the All-Star Break. Because he has not yet returned to the active roster on his own team, he will not be ready to participate in next Tuesday's game.

Because he was voted to start the game next Tuesday, Joc Pederson of the Los Angeles Dodgers will now take his place in the starting lineup and Ryan Braun of the Milwaukee Brewers will now take Holliday's spot on the NL All-Star Team.

Braun has returned to form as one of the Brewers' best offensive player, hitting Gardner was hitting .272 along with a team best 15 home runs (tied), 55 rbi's, 12 stolen bases (tied) and an OPS of .824. This will be Braun's sixth time as an All-Star and will join Brewers reliever Francisco Rodriguez Dellin Betances in Cincinnati.