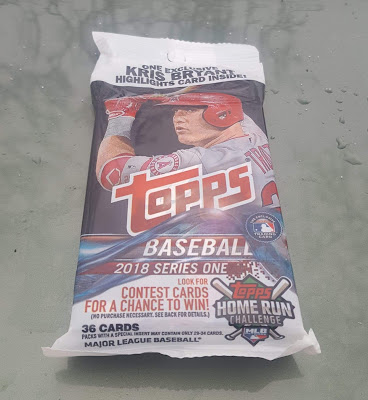 Happy New Year everyone. We are at my sister's house right now celebrating our family Christmas. The belief, my mom always says, is that your can have Christmas with your respective families, but NEW YEARS IS MINE!!! It is going to be different now that my dad is gone, but he was certainly here in spirit as prayers were made with him on our minds. It won't be the same, but we will carry on.

But in the spirit (see what I did there) of getting back into the swing of things on this humble, little blog, and before the food is served, what better time is there to do the pack break that I promised in my last post now. More people are coming in, and the tables are being spread where I am presently sitting (on the floor), so I am going to have to move to the couch.

The first pack I am opening in 2019 is from the first product of 2018, Topps Series 1. This 36-card jumbo pack came from Walmart, and should include one exclusive Kris Bryant Highlight card. Which one is in here is anybody's guess. What is inside this pack? Well... 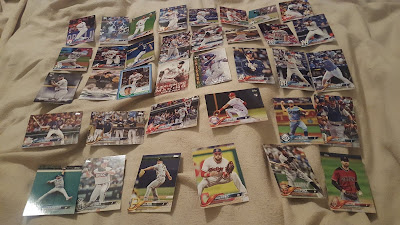 Lots of star power in this pack. Salvador Perez, Dansby Swanson AND Ozzie Albies, Mookie Betts AND Jackie Bradley Jr, 2 Daniel Murphy cards, 2 Luis Severino cards. This is a good pack, even without an auto or relic card.

Other than the expected KB highlight card (and it was KB-17 to boot), there were no Cubs cards, although there was at least one White Sox card.

I did start this post at my sister's. And I did actually open the above pack there. However, once the Karaoke started, I had to get out of the living room and wound up playing Mario Kart on the Nintendo Switch for the rest of the night. The pictures were taken after I got home.

But at least I have the pack breaks off to a flying start. Which pack am I going to open next? I don't know yet. It all depends on what I grab when I head back to work tomorrow.

Your post title had me thinking you got some exclusive.

Karaoke, the family, and a pack of baseball cards during the holiday season. Does it get any better than this?