Work has been crazy busy as we headed into the New Year. I may have been with the food broker for a year, but I am still figuring things out and realizing that I still have a lot to learn about this side of the specialty foods industry. Now, this does not mean that I am having a hard time. Not in the least. But as head into year two of this journey, there will be more responsibility given to me, and I am looking forward to the challenge.

With that said, the focus on doing a pack break during my lunch break is going to be a bit of a challenge as it turns out that I didn't have one (or yesterday, depending on where in the world you're in). But in between shifts, which means upon returning home, changing into my pharmacy scrubs, and heading to the part-time gig, I did have a bit of time to do a quick pack break. And what better way to spend 5 minutes than to open one of the three packs of 2018 Topps Allen & Ginter's that I bought at a Target a while back. 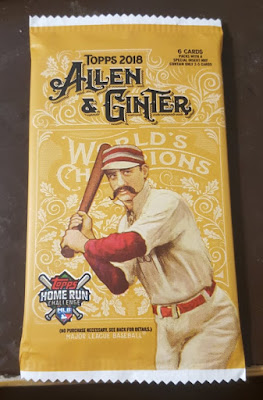 Need to make this quick. What was in this pack you ask?

Again, no Cubs cards, and only three player cards (all pitchers). But to have a card of the first woman to win the Spink Award for journalism in Claire Smith is nice. Also, as a big fan of flags (go away Sheldon), the Corsica Flag is a nice one to have. The 25-card set is nice, and the tidbit of information about what was the country of Corsica, an island that was "won by France in 1769," offers a brief snippet of it's brief history.

There is a three-card bonus pack of parallel mini cards that came with the 3-pack of A&G. I'll probably open that later. I can already see what's in the pack, so that's not going to be a surprise. But at least I'll have something to open when I'm fresh out of packs.

JayBee Anama
Posted by James B. Anama at 2:10 AM

Although I wasn't too excited about what I pulled out of all of my A&G blasters... I've gotta admit, I'm always excited to see who's going to be on their checklist. Hope you pull some Cubs out of the last three packs.