Today was a great day to be the parent of a Special Olympian. 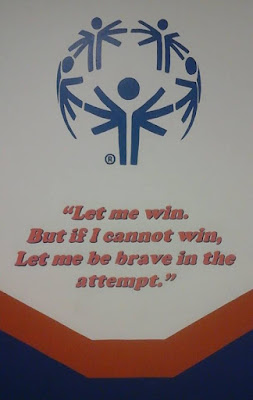 My son has been a part of Special Olympics, representing his high school since his sophomore year. As a soph, he took home a silver medal in ramp bowling, a silver medal in the 4x100 m snowshoe relay, and a gold medal in the 100 m showshoe race. As a junior, he earned gold medals in the sectional, regional, and state Olympics in ramp bowling (you had to win gold in the sectional to get to the regional, and then win gold in the regional to get to state finals).

Today, he and his high school's Special Olympic team earned a combined 18 medals, 10 golds. My son and four of his mates will be heading to the state finals later in February to compete in the IL Winter Special Olympics.

I am very proud of my son. I find it ironic. Many years ago, when he was little and we didn't know why his development was delayed compared to his sister, his doctor actually said, "Don't expect an Olympic athlete out of him." Guess he proved the doctor wrong, huh?

So back to the point. I brought a pack of 2018 Topps Gallery with me, just in case we had some time to kill between races. Topps Gallery, or at least the last two years it has been put out into the market, has been a Walmart-exclusive product. This is similar to Topps Fire being a Target-exclusive item. I guess Topps figured out a way to expand their product catalog without hitting the Hobby wall of 17 products per year (I've lost count, but I'm pretty sure that this is correct). It's a beautifully designed set, with all of the cards looking like paintings that belong...well...you get the idea.

So what was in this 12-card pack? Will I finally...FINALLY...get a Cubs card? Here goes: 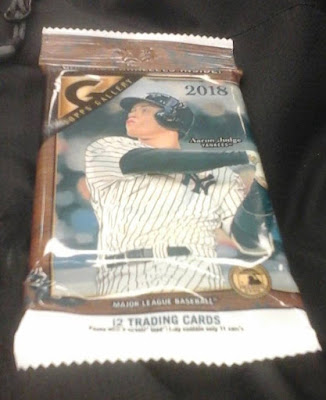 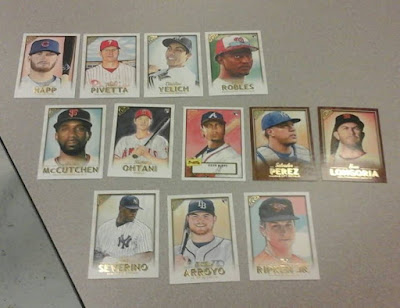 First, finally, a Cubs card!!! And what a player to start the pack...the guy that started the 2018 season with a first-pitch home run.

A very good pack, in my opinion. Can't go wrong when you get both of the Giants' new acquisitions (even if McCutchen was traded off to the Yankees). What are the odds of getting two Christians in a pack (the MVP to boot). Got another Severino card, and then the Ripken at the end? Great pack.

I might have to open something from Target to balance out. Maybe a pack of Fire.

The pack I give a B+. I'd be happier with about any other Cub than Ian Happ.
The story about your son gets an A+

Congratulations to your son and his teammates on earning 18 medals yesterday! And best of luck to him in February. As for the pack... congratulations on pulling the Happ and Ohtani!