Thank You Toys "R" Us! I Could Not Have Grown My Collection Without You!

Growing up, there was no place I loved going to more than Toys "R" Us! (No, I can't do the reverse R, so I'm not going to even try). For a kid, it was every theme park, museum, and wonderland rolled into one. I loved seeing toys, action figures, games and just wishing that one day I could buy them for me or any possible children I thought I'd have when I was older.

Fast forward about 14 years. My wife and I had spent hours at a Babies "R" Us! looking for items that we were going to need for our soon-to-arrive-child. We did not know what our baby was going to be (it wound up being a girl), so we asked for bottles, utensils, diapers, all of the fixings.

Fast forward about 5 years later. When I had time, I'd take my kids to the Toys "R" Us! They had their own interests in what kinds of toys they wanted, and when I had the money to do it, I was so happy because I fulfilled the wish I made for myself when I was much younger.

But that did not mean that there wasn't stuff I wanted to buy at TRU. Why? Because TRU sold baseball cards. And I think you know where this is going. But hold on.

The first real baseball card purchase I made at the world's greatest toy store was a wholly new baseball card product that happened to be called Topps Hot Button Baseball. 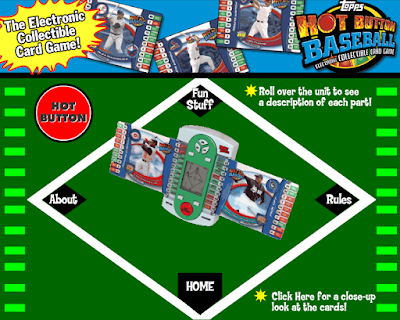 It was an electronic game, with lights on both sides that would flash in random order on both sides. The cards in this set were transparent, and the idea was that you would put a batter card on one side, and a pitcher card on the other, and depending on where the lights stop (you press the Hot Button to start the lights, and press it again to stop the lights from flashing) determines what the play was going to be in the game between the two "players." 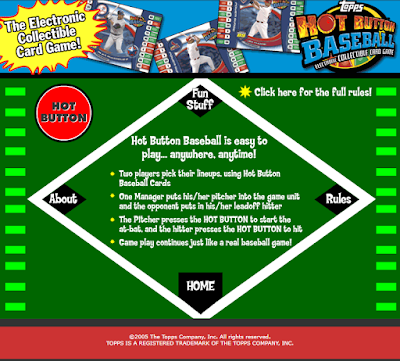 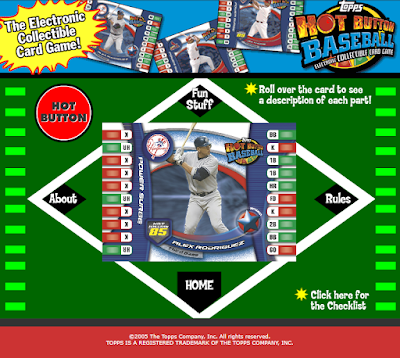 But it said that there were booster packs with more players.

And the hunt was on.

I eventually wiped out the local Target of booster packs. I went to other TRU's. I wound up with a complete 140 card set and played the game with my then 5-year-old daughter, and a lot on my own, playing both teams. I even created scorecards, and spreadsheets, and even slips of papers that had card numbers so that I could pick random teams. I was insane.

The original website is long gone, but thanks to the Wayback Machine, if you want to go on a nostalgia trip, click here.

Now, I don't collect parallels, but I do collect retail-exclusive inserts. And while TRU was never given exclusive insert sets, blister packs of 2011 Topps included purple Diamond Anniversary cards. 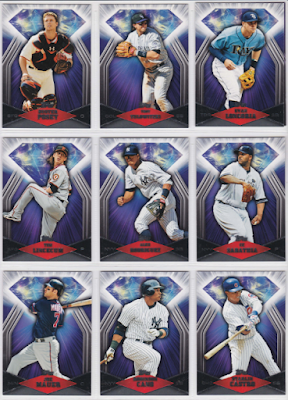 There are ten cards in the Purple Diamond set that could only be found in two-pack blisters that were sold at TRU. I remember taking the kids to TRU one night in 2011. I let them run loose while I sat on the ground near the display, trying to peek through the back of the packs, just to see if I can figure out which card was included. I wound up being able to find all ten cards, buying 20 packs of 2011 Topps Series 1, all just to find these inserts. My then 11-year-old thought I was crazy, until I told her she could buy whatever she and her then 9-year-old brother wanted (within reason, of course). Two video games later, we left happy with our purchases. 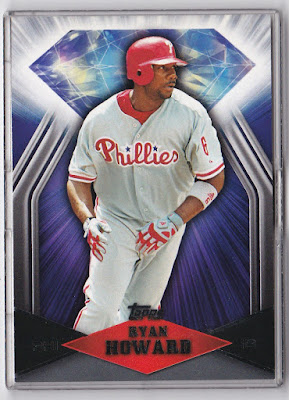 Now that the kids are mid-to-late teenagers, we really haven't made many trips back since that night. Sure, when I was unemployed, to make myself feel better, I'd go to the store, just to see what was there. But to be a middle-aged guy by himself at a store like this, I'm sure employees were just watching me to make sure I'm not some kind of stalker/potential kidnapper.

When I heard that TRU was going into bankruptcy, I was sad. Sure, thanks to websites (cough...Amazon...cough) (cough...eBay...cough), brick and mortar stores were losing customers. Even places like Walmart and Target were taking a large bite out of TRU's market. Now, Toys "R" Us will be gone, and all that are left are memories. Memories of when I was younger. Memories of when the kids were little. Memories of the day I discovered Hot Button Baseball.

Thank you very much Toys "R" Us. My family and I will miss you dearly.

At least until KB Toys comes back later this year...

I'll always have fond memories of TRU... but there won't be many that are card related. I might have picked up cards a few times, but none of them were memorable. For me... TRU will mainly be remembered for my video game era. My buddies and I would hit it up every week back in the 90's.

As for KayBee... that was my toy store of choice when it came to cards and Kenner SLU's.