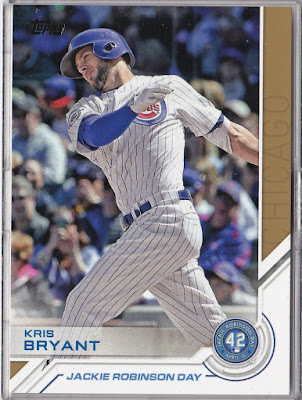 On April 15, 1997, MLB announced that it was going to retire the uniform #42 for all 28 teams in MLB in honor of Jackie Robinson. This meant that the Arizona Diamondbacks and Tampa Bay Devil Rays, the new expansion teams that would begin their inaugural seasons the following year, would not be able to use the #42 when they assign uniform numbers for any of their players, and they hadn't even started yet. Teams in the minors would not use the number either.

There were, at the time, 13 active players who were assigned the number 42 at the time it was retired league wide, Some names, you know: Mariano Rivera, Mo Vaughn, Butch Huskey. Others, like Marc Sagmoen, was a rookie who was called up to the Rangers squad that day and didn't know that the number was going to be retired THAT NIGHT. He had already had an at bat when he was told to take his uniform off because, as he found out later, that his jersey was going to be shipped to Cooperstown. He only has 21 MLB games under his belt, with 1997 being his lone season in the big leagues. Although Sagmoen is now a policeman in the Seattle area, he has a link to history that not many can claim.

Jackie Robinson is a legendary player who changed the course of baseball history by not only being the first African-American player to play in the majors, but by being a man who played the game with dignity and opened the doors for many players, not only here in the US, but around the world.

Today, I turn 42 years old. And as I work on the 2018 Topps set, I reflect on what I've done in my life so far. I have experienced both good times and times that were not so good. Some of the things I was able to do when I was younger, I have a hard time doing now. The quantities of food that I used to eat during my college days I can't stomach anymore (maybe that's a good thing). There are things that I've always wanted to do that I accept I will probably never do. And I'm okay with that.

But through it all, I am happy.

I am happy to have a family who I love dearly, a wonderful wife who supports me and I make sure to do the same no matter what, and two children who I couldn't be more proud of as they become young adults. I am happy that we are all in good health, a roof over our heads, and jobs (thankfully) to support us.

I am happy that I can see my parents and siblings during our (almost) weekly dinners.

I am happy to have that escape that is called The Hobby that I can go to when I can. It's fun to look back and reminisce about what I have done these past 42 years. But I look forward to the next part of my journey.

Thank you for being a part of it.

JayBee Anama
Posted by James B. Anama at 8:00 PM

And a Happy Birthday from me! Man are you blessed.