Updating the Sports Card Blogroll, Just In Time for 2018, and Other Things.

Between working with a food broker and a pharmacy (yes, they let me work with drugs), there really hasn't been much time to relax. Not complaining, but I haven't had a day off since January 1. That's a good thing as it means a steady paycheck and I am able to pay bills and support my family.

More importantly, it means I have disposable income to pay for my habit (that pesky thing called baseball cards). I am going to ask if I can hang out on Friday night at the convention center as the spring card show is this weekend. And, as it was my birthday yesterday, maybe I celebrate by buying a few cards (or something).

In the meantime, I wanted to do a bit of catch up since I didn't post anything since I bought my first few packs of 2018 Topps Series 1.

So I decided to take two Topps packs each from Target and Walmart and put them in a box. The first pack I picked was from Walmart. So the first card from that pack, the official Topps first card for 2018 (for me) is: 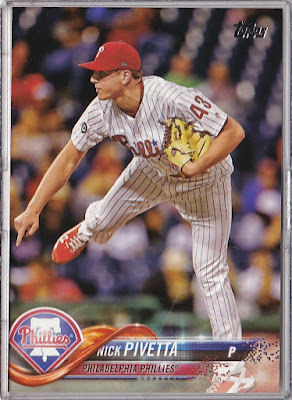 The first card from the Target card was of: 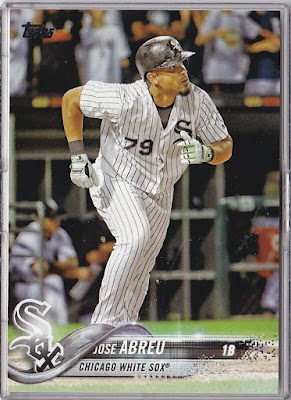 (On an unrelated note, I'm going to miss my HP scanner, but I'm starting to get the hang of this scanner/printer...loving it).

On the insert front, I did get one SP, Dexter Fowler of the Cardinals. But after opening 10 regular packs, 4 jumbos and two blaster boxes, the best card came from the fourth pack that I opened for the year. From the second Target pack that I opened, I found this: 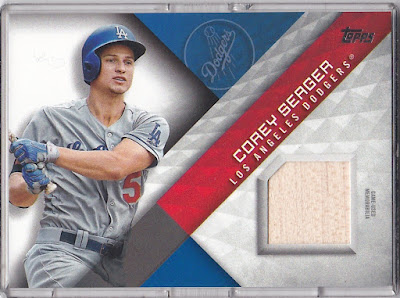 This only means one of two things:
Either way, I'm happy with the pull as I rarely, if ever, get a card like this.

Now, onto the other reason for posting tonight. It's time, once again, to update the Sports Card Blogroll.

Yes, blogging seems to be a dying form of communicating. We've lost a number of bloggers to other social media platforms like Twitter (you can still follow me as I hang out there from time to time @bdj610). But perusing the site at 280 characters, I'm discovering new voices, and have decided not only to give them a follow, but to add their sites to the big blogroll. And of course, new blogs tend to find other new blogs, and so on, and so on...

But first, time to remove the blogs that have not had any activity in the past six months. The following blogs have been removed from the main blogroll:
But as some blogs leave us, I am adding a few new blogs onto the site, including:
So there will be at least 206 blogs on the main blogroll when I'm done with the updating tonight. Would you like to add your blog to the site that has been keeping tabs of the Hobby Blogging Community for almost a decade (I can't believe it's almost 10 years)? Send me an email at bdj610@hotmail.com, DM me on Twitter (@bdj610), or just leave me comments.

That Seager card is beautiful...and from Target...WOW!

Enjoy the show this weekend!

I was on the roll at some point but probably fell off during a hiatus. I've been back since the end of last year and going strong. Thanks for the consideration.

Great pull with that Seager!

I really hope that it's a case of you beating the pack searchers ;)

Thanks for the offer! Mine is oldredsoxcards.blogspot.com