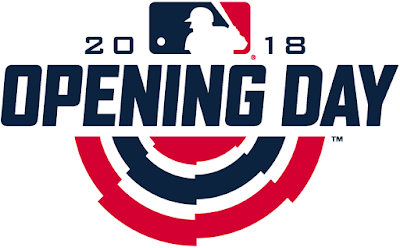 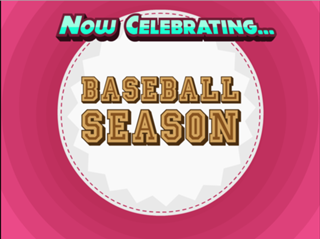 Okay, so it happened yesterday. I had planned on writing this in the morning, but life happened.

Twenty-six teams played yesterday (two games were postponed due to weather. I have my master set (including the Bryant and Jeter Tribute sets...nine insert sets total) waiting to go into sheets and a binder (a 3-inch for now...I'm sure I'll have to order a 6 before the end of the year...again!!!)

The Cubs won (okay, it was against the Miami Starlin Castros and 24 other guys calling themselves Marlins...heck if Marlins Man Laurence Leavy has given up on them...) 8-4, with Ian Happ hitting the first pitch...first pitch (okay, so it was some guy whose only eponymous Topps card to date is from 2015...) of the season out of the yard. 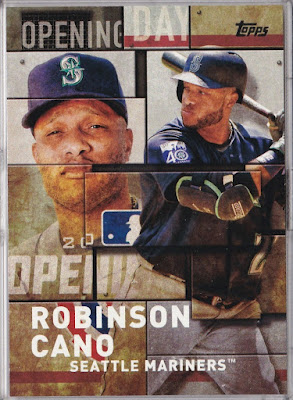 I love how this set was designed. Pictures and graphics that look like they were projected onto tiles. Each team is represented here (well almost, Giancarlo Stanton, Andrew McCutchen, and Evan Longoria grace the checklist...and you get the idea). The backs of the cards gives a brief synopsis of what each subject did during a past Opening Day, whether it be in the majors or if the player started in the minors the year prior. 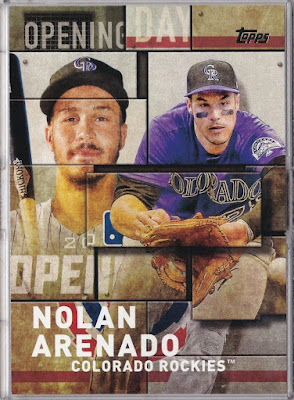 Now you can only find these cards in packs sold at retail stores, not necessarily exclusive to either WalMart or Target.

As I finally finish this post, the Cubs lost to the Marlins in 17 innings (how's that speed-up-the-pace-of-play-thing going for you now @MLB?)

I really liked these inserts as well. I'll keep looking for them as I break more Topps baseball. Good job highlighting these nice looking cards.