It's new year's eve. My sister's birthday (happy birthday Migz!!!) And the year that was 2011 is now drawing ever so closer to an end. By the time this post appears, it will be just two hours before midnight in the Central Time Zone.

Anyway, the point of this post is basically to review the past year's triumphs and failures and what the direction of this blog is going to be.

I will be honest and say that a lot of what I wanted to do this past year on this humble, little blog, were just not done.  I have many excuses, reasons, and explanations, and I explained myself almost every time I started to lax or not post as often as a blog of this nature should.  Projects tossed aside because of time/responsibilities/laziness.  The excuses end, and I would like to apologize because I feel that I had strayed from the very purpose of creating this blog.  I hope that in 2012, that I will have more time to execute the ideas I've had swirling in my head onto this dog and pony show.

The Topps Card Randomizer worked fine in the first couple of weeks in January, but then subsequently fell by the wayside.The good news is that it is now back up and running, and will now include cards from 2011Topps and Topps Update Series (Yay!!!). The first RotC post will appear on the first of January, at 1:00 p.m. CST.

It's 2012, so what happened to the 2011 Topps Archives Project now that there will be an Archives product in 2012? Well, instead of scrapping it, what we could do is continue the series, but instead of 2011, we'll go ahead with 2012, as a "What this set should have been" concept.

But I might change my mind and just continue the project as a "this should have been made in 2011" kind of thing.For those of you who don't know what that is (and who could blame you for not knowing, I only did one post for this project in 2011), I invite you to read the first post explaining what the 2011 Topps Archives project was all about. The checklist of the first nineteen subjects are on the sidebar. I originally wanted to have 200 players and a ton of extras, making a 450 card set. So I only need 181 players to go. I do have some future archives players and the managers in mind. Those will come up later in the year.

I am still missing some cards to complete my 2011 Topps Master set. Specifically, I'm missing about 16 ToppsTown cards from 2011 Updates. I thought this was a one card per pack set. Why did Topps make this so hard to complete??? Does this mean that ToppsTown will end in 2012? I hope not. I also still need to find the 2011 HTA set (the 25 card set...not the Prime 9 one). I'm hoping that a full set will come my way at a show or on the Bay. I will also update the official card count and my want list on the side bar soon. And because I missed out on sets that I wanted to acquire in 2011 (Allen & Ginter, Gypsy Queen, the 2010 National Chicle, Allen & Ginter, Topps 206 from both 2009 and 2010), if I do ever find them, I will share my excitement with the blog. Hopefully, the prices remain steady if drastically decrease on the Bay.

Also, this humble little blog will continue the All-Star simulations with the 2011 All-Star teams that were created in October. As you can see on the sidebar, I have simulated 21 seasons worth of All-Star games featuring rosters that were created by yours truly, and will have the results of the 2010 & 2011 All-Star series before pitchers and catchers report for spring training (don't you just love those four words..."pitchers and catchers report").

The Topps 300 (and then some...) while it did get some nominations added to my choices, never really got of the ground otherwise. As much as I tried to get more exposure for the site, it just never quite took off. I will leave the site open for posterity. And who knows? In 2021, maybe I'll do redo it to the Topps 400 (and then some...).

I did not get to buy as much Topps product this year as I would have liked. Money was tight this year and more of it seemed to be earmarked for other, more important things (like bills, kid's education, etc). So while I did succeed in acquiring full master sets of this year's flagship product, I didn't really get to buy the usual hobby box of each. I am hoping that if all goes well, 2012 will be a different story. I also wasn't active enough in searching for or trading for the short prints that came out with this year's set. I plan on becoming more active on that front in 2012.

I must say that it's been an interesting year in the Hobby Blogging Community, as well as the Hobby in general. The Sports Card Blogroll reached 350 active blogs for the first time ever. It is my hope that by next year, we'll have 400 plus listed. My only concern is that some of the long time bloggers may have taken a different route regarding where they post their Hobby writings and may have decided to spend less time on their blog. I sure hope that is not the case and that the number of voices in our community continues to grow.

There is so much more to look forward to in 2012. Most important of all of this is the cards. THE CARDS!!! The cards of 2012 Topps, while initially received with disappointment in the design department, are now starting to look great and I can't wait to add them to my collection. Stay tuned for information on SP's, interesting variations, the ever "dreaded" gimmicks, and all things Topps as they celebrate their 61st year in the MLB card business. With that said, in what has been tradition on this blog: 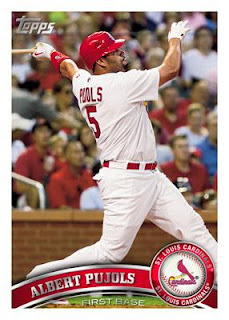 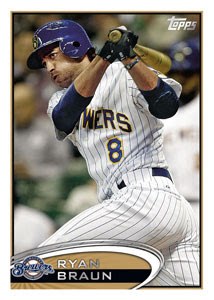 May all your collections grow to new heights. Let's hope Topps makes it a bit easier on us insane set collectors. Thank you for letting me into your computers this past year. I hope to be able to share more of my collection with you in 2012!!!

Email ThisBlogThis!Share to TwitterShare to FacebookShare to Pinterest
Labels: 2012, commentary, thank you, topps