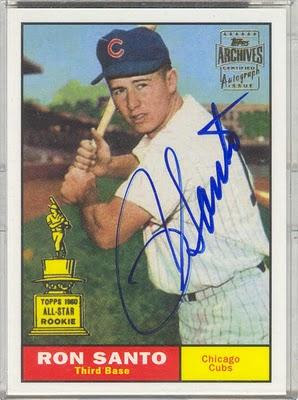 It has just been announced today, literally twenty six minutes ago, that Ron Santo was inducted into Baseball's Hall of Fame by the Golden Era Veteran's Committee. He is the 256th player inducted into the hallowed halls of Cooperstown. He is also the 18th player to be named to Topps' All-Star Rookie Team (1960) and a Hall of Famer.

One year and two days after he died!!!

As much as I am happy to hear that he is FINALLY in, I am deeply disappointed that it took this long for him to get there, especially after he had already passed and will not get his chance to speak at the induction ceremony in 2012. I am sure that whoever will do the honors of speaking for Mr. Santo's behalf will do well in honoring the now HOF 3rd baseman and legendary announcer.

I just wish he was here to see it. It is bittersweet accomplishment.