Changes Are Coming to MLB Team Logos...And Topps Knew About Them Before We Did!!!

I've always been fascinated with the origins of team names and logos.  When I was 12, I bought a book from Mike Lessiter called The Names of the Games and even the sequel College Names of the Games which laid out this history of how a team (pro or college) got their nickname.  Now these books were published in 1988.  I have not seen a sequel since.  And even though names have changed (there's that word again) and franchises have been created, contracted, moved, etc, and this information can now be easily found on the Internet (okay, you have to do a bit of digging, but it's not hard to find), there isn't a source that puts all of this information into one neat package.

The closest thing I've found on the net that maintains the history of team logos is Chris Creamer's Sports Logos.net (http://sportslogos.net/).  This site which has been around since 1997 (during the web's tender developing stages), is a virtual museum of team logos.  Want to know what the 1932 Boston Braves logo looks like?  It's right here.  Ever notice the subtle changes in the Kansas City Royals' logo?  Did you know there was a subtle change in their logo?  Chris did and you can compare them for yourself (here's a hint...look at the letter "o").

What's my point?  Well, as you know, a number of MLB teams have made radical, yet positively accepted, changes to their logos for the 2012 season.  In one well documented case, the identity of an entire franchise has changed too. Here is what we know so far:

Say goodbye to the Florida Marlins and hello to your Miami Marlins!!!

Now what does this all mean, and what does this have to do with Topps baseball cards?  Simple.  The folks at Topps, via Twitter, posted a few interesting pics a few weeks ago. Here are a couple that caught my eye: 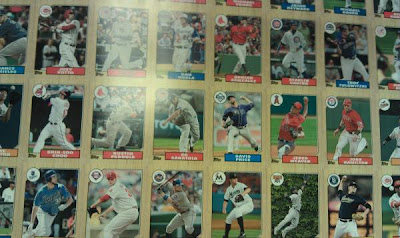 Just a heads up, these are the mini cards that pay homage to 1987 Topps. 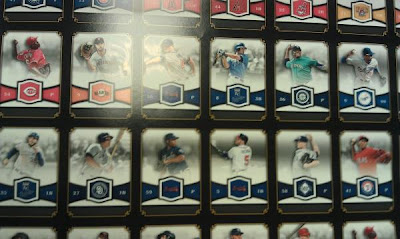 And these are possibly the Golden Moments insert cards.  Now notice the logos on the mini cards of Josh Johnson and Mat Latos above and of Chase Headley in the above photo.

They already show the new logos for both the Marlins and the Padres.

These photos were taken and published on Twitter on November 11, the same day that the Marlins "formally" announced their name change.  The Padres announced their logo change on November 9.  If these cards were made BEFORE the official logo changes, that means that the boys and girls at The Topps Company were notified sooner than the rest of the world.  And they made the changes just in time before the cards get packed out and distributed across the country.  How cool is that?

There was a third photo included on the tweet with the above two: 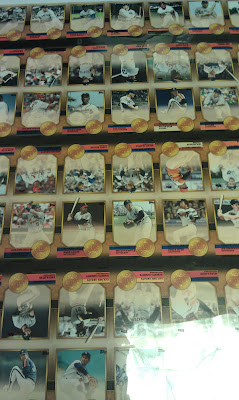 These may be autograph cards (just guessing by the fade that's happening on the bottom of the pictures just before the name banner).

So know that Topps is on the ball (no pun intended) and will have the proper logos for both the Marlins and Padres in Series 1.  Regarding the Blue Jays? Your guess is as good as mine.

These logo and uniform changes have a huuuuuuge lead time... The Mets had a good-looking blue "Los Mets" alternate jersey this past season, and people lobbied for something like it to be a 2012 alternate, but the team said it was already too late.

I would think that certain people at Topps knew about these changes well in advance. Just a guess, but maybe they hold off on printing anything with the logos until after the public unveilings, just to help prevent leaks.