Introducing Your 2011 NL Most Valuable Player...Most Competitive Field for the MVP 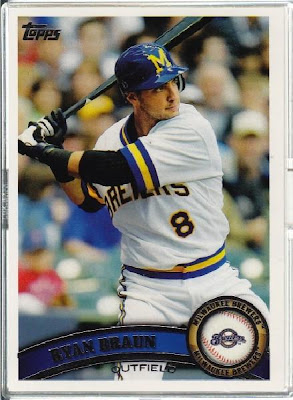 In recent years, Topps has reserved six cards within Series 1 for the AL and NL award winners that are being announced this week. Unfortunately, this year's preliminary checklist doesn't specify what numbers are being held for the them.

On Monday, Justin Verlander was named the AL Most Valuable Player. Today, we know who won the award in the National League.

Congratulations to Ryan Braun of the Milwaukee Brewers for being named the National League's Most Valuable Player. Of the six major awards this week, the field for this award was very competitive and many of the runners-up made strong cases for themselves.  But in the end, it was Braun who takes the plaque (or trophy, or whatever they give the winner).  Although he didn't lead the league in any of the Triple Crown categories (.332 was good for second, 33 HR and 111 RBI's), he did lead the NL in other stats like slugging percentage (.597), and OPS (.994).

Braun becomes the 13th player to win both the NL Rookie of the Year award (2007) and MVP, the first since Ryan Howard.

JayBee Anama
Posted by James B. Anama at 2:31 PM