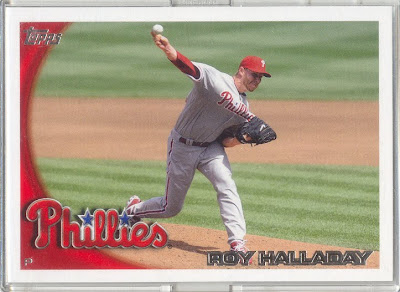 In recent years, Topps has reserved six cards within Series 1 for the AL and NL award winners that are being announced this week. Card #'s 146 and #168 (according to the preliminary checklist) are reserved for the Cy Young Award Winners.

As of about an hour ago, we know who gets to appear on either card #146 or #168 (Topps did not specify which card goes to which league's winner).

Congratulations to Roy Halladay of the Philadelphia Phillies for winning the NL Cy Young Award in unanimous fashion. In the "Year of the Pitcher," there were certainly many pitchers who could have made legitimate claims for the award.

So card #146 or #168 will be of Halladay, the Phillies' All-Star ace who pitched a perfect game during the regular season and a no-hitter in the NLDS, finished his first year in the National League as the league leader in complete games (nine), shutouts (four) and innings pitched (250 2/3) to go with a 21-10 record and 2.44 ERA. Getting all 32 first-place votes (a unanimous 224 points), Doc beat out a field that included Adam Wainwright of the Cardinals (122, 28 second-place votes), Ubaldo Jimenez of the Rockies (90, 4), Tim Hudson of the Braves (39), Josh Johnson of the Marlins (34), teammate Roy Oswalt (14), Brian Wilson of the Giants (7), Heath Bell and Mat Latos of the Padres (4 points each), Brett Myers of the Astros (2), defending two-time Cy Young winner Tim Lincecum (2), Bronson Arroyo of the Reds (1), and Matt Cain of the Giants (1).

Halladay also becomes the fifth player ever to win the award in both leagues (joining Gaylord Perry, Pedro Martinez, Randy Johnson, and Roger Clemens), and the fourth Phillie pitcher to win the Cy Young (with Steve Carlton, John Denny, and Steve Bedrosian).

JayBee Anama
Posted by James B. Anama at 2:48 PM