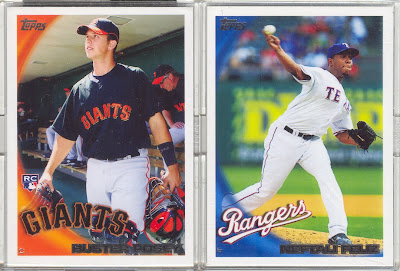 In recent years, Topps has reserved six cards within Series 1 for the AL and NL award winners that are being announced this week. Card #'s 26 and #282 (according to the preliminary checklist) are reserved for the Rookies of the Year.

Congratulations to both Buster Posey of the San Francisco Giants and Neftali Feliz of the Texas Rangers for winning the National League and American League Rookies of the Year Awards. Until the announcements were made this afternoon, it was anybody's guess as to who would win either award, as both leagues had many worthy candidates.

In what was a very competitive ballot, Posey, the Giants superstar-in-the-making, paced the competition (129 points, 20 first-place votes). He beat out eight other players for the award, including All-Star Jason Heyward of the Braves (107, 9), Jamie Garcia of the Cardinals (24, 1), Gaby Sanchez of the Marlins (18, 2), Neil Walker of the Pirates (3 points), Starlin Castro of the Cubs (3), Ike Davis of the Mets (2), Jose Tabata of the Pirates (1), and Jonny Venters of the Braves (1).

JayBee Anama
Posted by James B. Anama at 2:30 PM