It looks like Pack Break Week #4 will have to be extended to this week as it has been one whirlwind weekend.

But now that the festivities are over and everyone is back at work and school (almost...), it's time to get back in gear and kick off 2016 with a bang by opening up the pack I was supposed to open on Friday, 2015 Topps Allen & Ginter's. 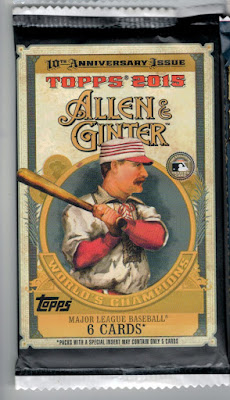 In it's 10th successful campaign, Topps Allen & Ginter's World Champions continues combining the world of sports with, well, everything else. Non baseball card subjects included the four guys who try to out-do each other on Impractical Jokers, the Appomattox Court House, the Magna Carta, and the four "characters" from the Rocky movies (not the actors who portrayed them). Unique insert sets, whether they are the standard 2½ x 3½ inch or the mini cards which were the size of the original cards that would have been inserted in tobacco products, round out this incredible product.

Now, there are collectors out there who even after 10 years of exposure to A&G still don't get the concept and complain about all of these extra subjects in their baseball cards. They're missing the point of the set. This is not just a baseball card product, but it pays homage to all the unique and crazy subjects that the original Allen & Ginter's produced in the 19th century.

So what cards did I manage to get in my six-card pack of A&G? On the 10th Anniversary, this was what was inside: 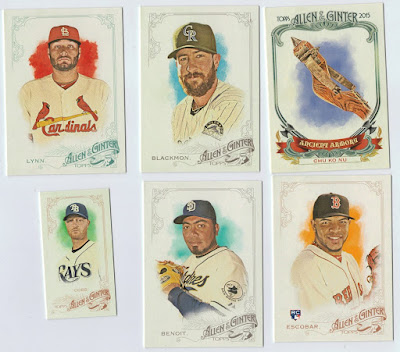 Other than the nice insert card, this one joins the Stadium Club pack as a downer. Don't get me wrong, the base design is nice, and yes, there are a couple of All-Stars in the pack. But for this Cubs fan, it's nothing to write home about.

Here's hoping that the 2015 Topps Update Series pack that I plan on opening tomorrow comes up with something nice. And while we're at it, I might as well open the final pack from the dollar store, 2014 Topps Update Series. Should be interesting to say the least.

Have a great day everyone.

That's exactly the kind of pack I usually get. In reference to your last post I opened six packs of Stadium Club this year and got almost nothing I liked. Javier Baez saved one pack.

I agree. I like the design but the fact that there are few cards in each pack leads to pulls like the one you had. The price point makes it hurt that much more. It isn't uncommon for me to get nothing in a pack of these cards.