Back in 2011, Topps had this brilliant idea. They would hold a contest to determine the Top 60 Topps cards in its 50 year history. Now Topps picked 100 cards from its wide collection of cards and asked fans and collectors to pick their top ten cards from the 100. While the list contained many rookies and other classic cards (which you can find here), there were some cards that I really didn't think belonged here.

After picking my ten, I didn't feel so good. My choices were fine, but in my mind, the Hobby Blogging Community could do better.

That's when I decided to create "The Topps 300 (and then some...)" I picked 5 cards from each year of Topps' history (from 1951 through 2010) that I thought were the best from that particular year and asked readers to respond with what they thought of my picks and if they believed another card could be better than what I picked (that's the "and then some..." part of the site).

My efforts did gain a bit of publicity, thanks to Rich Mueller and the Sports Collectors Daily. I had hoped that by the end of the year, I could do a countdown of the best card of each year and then from that, pick the top 60 cards overall. While the final countdown never came to fruition, the comments left by readers with their picks were great and I thank all of those who took time out of their days to comment.

It's now five years later. The site is still up, and although there haven't been any new comments since 2014, people still do come across that blog.

For the first series of its eponymous set for 2016, Topps has decided to include a 65-card insert set called "Berger's Best." In honor of the "Father of the Modern Day Baseball Card," Topps has decided that they would include a reprint of one card from each year (1952-2015). I like the concept, but I really hope that they skip the "bio in the back" as they did with their reprint sets from 2010 and 2011 - only to include SP's of full reprint cards as well. I know I'll be going after this set, I just am nervous about how they'll present it.

That made me think. What if I presented my Topps 5 (get it...) cards from each of the past five seasons and presented them the same way I did back then? Make it an update, an addendum, to the original 60 years that I created five years prior. To that, I said, "Why not?"

So I present for your review tonight, my Top 25 cards, 5 for each year, from 2011 through 2015. Tell me if you agree with my picks or if I'm nuts and I could have picked another card.

To paraphrase the intro on the Topps 300 blog:

"Below are scans of the best five (in my opinion) cards from each year from the last 5 years of Topps Baseball Cards. I picked the 25 based on a few qualifiers, including: Key Rookie, Unique Photo, Action Shot, Card caused a buzz in the Hobby, Noteworthy Errors, Player had an impact on the game that particular year."

Let me know what you think. 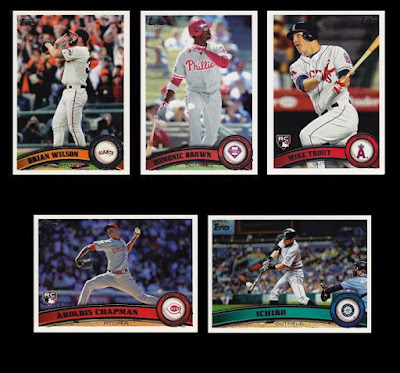 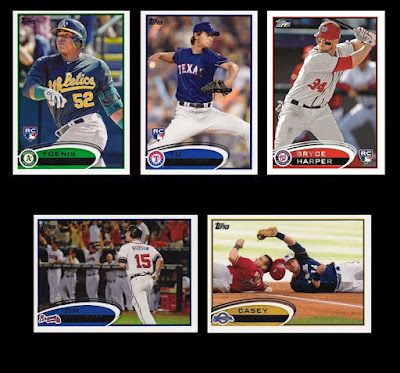 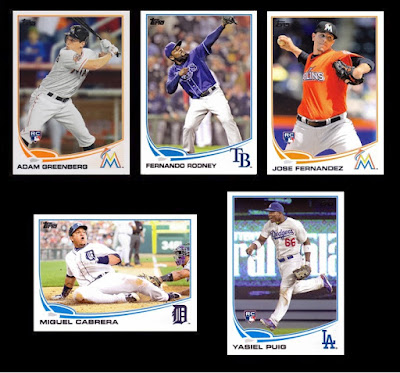 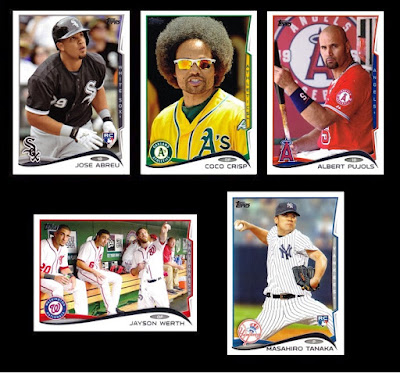 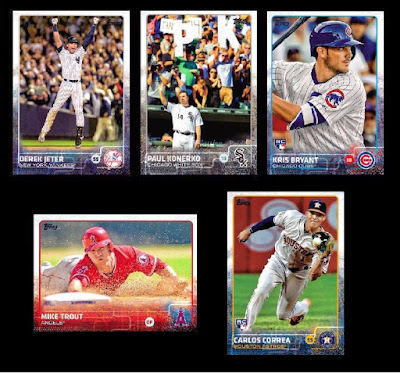 Feel free to leave comments on here. Let me know if you can think of a better card than one that I selected. I'm pretty sure that some of these cards will be included in that Berger's Best set (which is also confirmed for Series 2...I'll get around to sell sheets later).

JayBee Anama
Posted by James B. Anama at 8:19 PM

Many of those cards did cause a buzz in the blogosphere. I can recall at least half of them off the top of my head.

Can't argue with any of your choices here. Some great cards in the lists.

People are still going crazy for the Trout Rookie - the prices of 2011 Update boxes are astronomical - if you can even find them!

I can't argue too much with your selections. I'd maybe make some changes, but good cards all the way around. Here's some thoughts: