Please pretend it's Wednesday now. I did open these packs one-a-day as I stated before, I somehow just never got around to posting the results...until now. 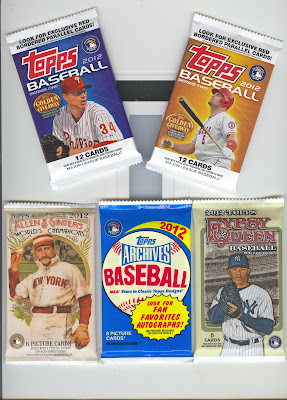 As stated, I bought five packs of different Topps products at the local Target. On Tuesday, I opened a pack of 2012 Topps Series 1. Today I will be sharing with the world what cards showed up in my pack of 2012 Topps Allen & Ginter.

Probably (okay, second to Heritage) Topps' best selling retro-product, Allen & Ginter has consistently proven to be a wildly popular product with those who normally do not buy baseball cards.  The base cards are beatifully designed, and the inclusion of "champions" from other sports have been the subject of discussion over the years.  The themes for the insert sets every year are unique as well, as you never know what Topps will include in the product.  I normally try for a master set of base cards and the regularly sized insert sets, but there are some mini inserts that I like as well (Flags of the World, Uninvited Guests).  Again, Allen & Ginter appeals to many demographics, and this year's product is no exception.

I know I do not participate in the Gint-A-Cuffs competition, but if somebody could tell me how many points I have, it would be greatly appreciated.  So what did I get inside my pack of A & G? 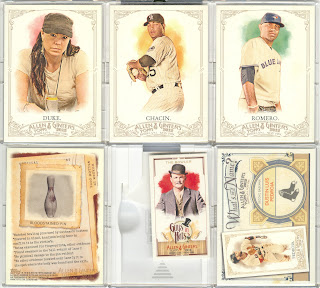 Totally underwhelming pack to say the least.  I don't think I like the idea that the price of a 6- card pack of a mid-level product is $3.19 at Target.  Yes, half the pack consisted of inserts . Yes, one of them is a card that was part of the already solved Ginter Code.  And short of Blue Jays All-Star Ricky Romero, this pack is a dud. 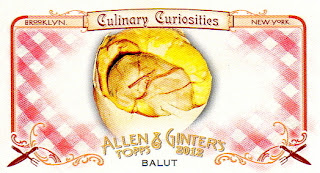 The card above is the one I'm after.  It is from the Culinary Curiosities mini insert set.  Balut, for those who are curious (hence the name of the insert set I guess), is a fertilized duck embryo.  Why do I want it?  It's a Filipino delicacy.  And I want one to add to my Philippines mini insert set (which includes the flag from 2007,  President Arroyo from 2008, Jose Rizal from 2009, the carabao from 2010, and the "Philippine Monkey" (or as I know it as the monkey-eating eagle) from 2011.  Does anybody have this card???  It was one that I somehow forgot to buy during my eBay binge a few weeks ago (and yes, I have all my cards and will update my collection count soon). If anybody has the above card and is willing to trade it to me, please feel free to e-mail me at bdj610@hotmail.com.  Personally, I like penoy (which is the less developed version of balut).

Three packs down, two to go.  The 2012 Topps Series 2 pack will be next on the "to open" schedule.  Will there be a Harper card?  Will there be a legendary short-print?  With my luck, probably not.  But it's nice to imagine, right?

The Guys in a Hat is a case hit...I'd say it was a good pack based on that!