The number one source in the hobby has images and initial checklists of the highly anticipated 2010 Topps Baseball Cards.

Series I will be a 330 card set filled with the usual players, rookies, league leaders, combo cards, and team cards makes a return in 2010. But it's the insert sets that I'm looking forward to as well. The insert themes are interesting to say the least.

As you probably all have read, Topps is buying back one million cards from the past 60 years worth of products and are reinserting them (or redemptions for the older, larger, and more expensive cards) into packs of 2010 Topps. Along with the buy backs, the following insert sets will be included in packs: 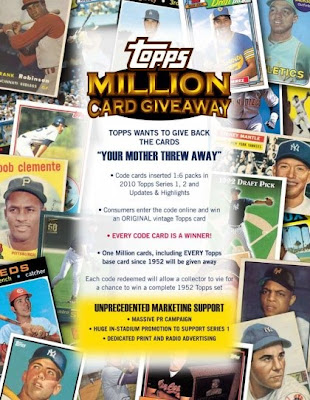 The Cards Your Mother Threw Out: Either these are reprints of cards from years gone by or they are similar to the Trading Card History series from 2008.

The History of the Game: Similar to the Legends of the Game series, but highlights historic events in baseball history (Ruth's sale to the Yankees, Jackie Robinson's debut, etc)

Tales of the Game: Another similar theme to HoG, but will discuss things like the invention of the DH, and the 1969 Mets for example.

Past and Present: Pairs legends of the game with today's superstars (don't they do this in Topps Heritage???) Autos and Relics will abound here.

When They Were Young: Features today's superstars in pictures of their youth (the Wright card utilizes the 1980 Topps design...draw your own conclusions as to how this set is going to look). This is similar to the "Boyhood Photos" from 1972. 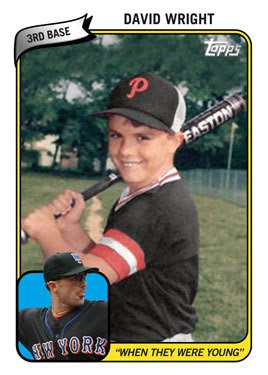 Peak Performance: Showcasing players past and present, and highlighting something of significance. Again, Autos and Relics should be aplenty here. 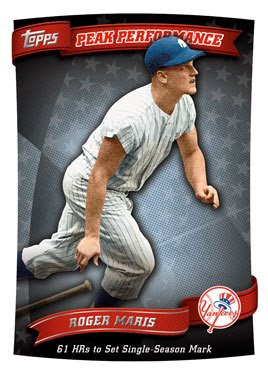 Turkey Red: Makes a return as the continuity insert, but this time, the design used for 2007 Turkey Red will be used (the light colored wood picture frames used for the boxers in the original T3 set). 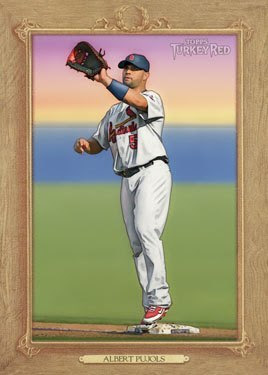 Logoman Patches: Topps first attempt at including the MLB logo (is this Harmon Killebrew?) in cards. The "Thumb in Nose" set to their competitors. Also will be used as a continuity program. How and why is anybody's guess.

If you want the checklist (and remember, it's subject to change), the boys and girls at Beckett has it:

The cards and inserts look great! I'm interested in the "Cards Your Mother Threw Out" inserts. My guess is based on the picture (1960 Yaz) that they will be reprints. Looking at the intial checklist, I came up with the corresponding reprints. Seems to make sense to me. Of course subject to change!

I just looked it up, JayBee, and the Harmon Killebrew, was the model for the logo.

I always like throwback cards like "mom tossed out cards". They should be on old cardboard stock...maybe even an old gum stain that is numbered!!