Whoever Wins the World Series...

For the first time since 2005, Topps has the honor of producing the World Series set.

Since 2004, the winner of the World Series has been honored with a 55-card box set, which included players, managers, League Playoff highlights, and World Series highlights, and the eventual MVP's.
Topps made the 55-card sets for the 2004 Red Sox and the 2005 White Sox, with that other company producing sets for the 2006 Cardinals, 2007 Red Sox, and 2008 Phillies. This year's winner will get a 27-card set in the blister packs similar to the 15-card team sets that came out earlier this year. They look pretty good. Check out scans of what the Phillies and Yankees World Series sets are going to look like. 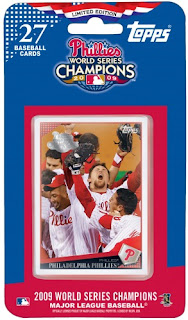 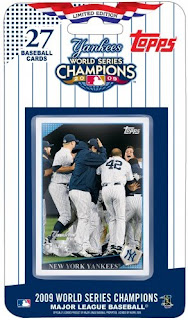 Remember, these are only preview scans. The losing team is not getting the set treatment (or are they???). The World Series set will retail at $9.99 and final checklists are still going to be determined.

May the best team win. Either way, collectors are going to have fun with this set. At a little over $10.00 with tax, I just hope these make it to Chicago.