It's So Hard to Say Goodbye... 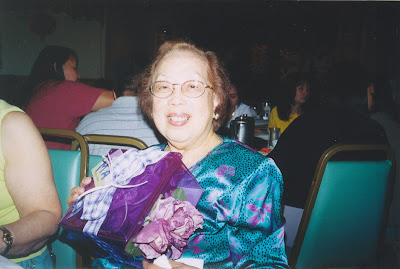 Gloria Y. Nichols. My "Lola" (grandmother).
I know that this is a baseball card blog, and so far, I've done a good job keeping my personal life separated from my Hobby life on this blog. And while I have not been posting much recently about my collection, something has come up the last couple of days that it's hard to even think about baseball cards and baseball in general.

You see, back on Mother's Day, I created a post honoring my grandmother, Gloria Y. Nichols. She was the lady that introduced me to the game of baseball, and even took me to see my first baseball game in 1989. She also took me to see the movie Bull Durham at the movie theater when it came out, but that's another story. She was also a big boxing fan. She was there when Muhammad Ali came to town for the "Thrilla in Manila," and presented him with a necklace of sampaguita flowers (similar to the leis that Hawaiians give welcoming travelers).

Outside of all that, she led a very full life. As owner of one of the most famous bakeries in the Philippines, her cakes and pastries were very well known throughout the islands. She made wedding cakes for presidents, and even Dwight D. Eisenhower sent her a letter of thanks when he came to Manila for a cake she made for him (we have that letter framed somewhere). She also was head of the HRAP (Hotel and Restaurant Association of the Philippines), and was instrumental in creating the Chefs on Parade. She held the largest New Year's Day parties for the kids in the neighborhood for many years, and continued that tradition even after her children and grandchildren settled in the United States.

Fast forward to 2008, her health has been failing, her memories fading, and has been living in a nursing home since her sister, my great aunt Portia, left for Manila back in September (or October, can't remember when exactly...my own fault for not remembering dates). Her health had progressively worsened and this past Saturday, she was rushed to the local hospital because she came down with pneumonia, which in elderly people (she's 91), apparently is a really bad thing to have.

My family and I spent the whole day on Saturday, and a few hours on Sunday, at the hospital, to be there with my parents, and siblings, and nephews and nieces, to help comfort my "Lola" (that's Tagalog/Filipino for grandmother) as she lays at the hospital. Her x-rays showed that her lungs are failing, and on Sunday, as it was my turn to sit with her, she began speaking in Pampangan (which is a dialect spoken in the Philippines), which I could not understand, (I have trouble understanding Tagalog/Filipino anyway so that's not surprising), but when she did speak in English, she mentioned seeing her mother and later her sister. This scared me a lot because it meant that she was preparing herself to go...

Selfishly, I did not want to be the last person to see her alive. I don't think I could handle that for the rest of my life. My heart started racing faster than hers did (and she was at 106 beats per minute). I was later told that I should look at it as an honor, but I don't think I am deserving of that. All I could do is hold her hand, start praying really loud so she could hear me, and just be her to calm herself down. Just hold on a bit longer until my mom could come in. I started recalling out loud to her some of the memories I had of her. Going backwards, from her birthday party last year, to the day my daughter was born. From that baseball game in 1989, to bringing me and my sisters to the US. From the time her house flooded in Manila, and we were just trying to gather our things so that they didn't get wet (there's a picture of that somewhere, I have to find it...), to the time that my school let out early because of a potential storm, and she couldn't find me (and I went to a school very far from home...she and her driver drove back and forth about four times until they found me late in the evening). From stopping my brother and I from fighting by asking if we wanted boxing gloves or knives, to watching her play mah johng with her friends. From going to the bakery she owned, to the memories of living in her home. Anything, just to try and jog her memory (and to try and calm me down).

It's hard for me to think right now. All I know is that I wanted to air my thoughts here. So to the ten or so readers that come here to read about Topps cards and what I think of them, I apologize for going off topic.

I leave here with the videos of two songs that have just been rattling in my head since the phone call.

Boyz II Men's "It's So Hard to Say Goodbye to Yesterday"


How do I say goodbye to what we had?
The good times that made us laugh
Outweigh the bad.
I thought we'd get to see forever
But forever's gone away
It's so hard to say goodbye to yesterday.

I don't know where this road
Is going to lead
All I know is where we've been
And what we've been through.
If we get to see tomorrow
I hope it's worth all the wait
It's so hard to say goodbye to yesterday.

And I'll take with me the memories
To be my sunshine after the rain
It's so hard to say goodbye to yesterday.

And I'll take with me the memories
To be my sunshine after the rain
It's so hard to say goodbye to yesterday.

And Eric Clapton's "Tears in Heaven"

Beyond the door,
There's peace I'm sure,
And I know there'll be no more
Tears in heaven.

Goodbye Lola. God Bless You. I Love You. And I Always Will. On behalf of Zebeda, Lynn, and Taylor, Thank You for Everything. Say hello to Mr. Nichols for us. You have a lot of catching up to do.

My deepest sympathies go out to you and your family, JayBee. I can tell that your grandmother was a wonderful woman from the amazing tribute that you wrote for her.

May God give you and your family peace and comfort during this time.

My thoughts and prayers go out to you and your family. May she rest in peace. You had some great memories of her. Thank you for sharing.

I'm very sorry to hear about your loss. Thanks for sharing those great memories.

By the way, which bakery did she own in the Philippines? My cousin lived there with her husband, who is native to the Philippines, for many years. Just curious.

Man, take all the time you need. I guarantee that you've got at least one guy coming back to read whenever you're ready to write again. 1 Week, 1 Month, 1 Year from now...I'll be back...

Your family has the sincere sorrow and sympathy of my family in what sounds to be a truly devastating loss for you. God bless you and if you need anything...don't ever hesitate to ask...

We are very sorry for your loss.

the diaries are aplenty. funny that each time i opened a page, your name popped out. seems you were her partner in crime, driving her here and there, all faithfully noted and written about. it will be a crime to just toss the diaries, did you want to be the keeper of the memories? they are worth reading. stuff i have now forgotten, dates and times, are preserved in these pages. including your getting lost.

You are a lucky man to have had such a wonderful person in your life. She will always live in your memories and the memories of many people.

God bless you and yours, JayBee.