I introduced the "Cards That Will Never See the Light of Day...EVER!!!" on a message board when Topps came out with their team-specific factory sets in 2004. The concept was simple. Topps created team-specific factory sets for the Red Sox, Cubs, Yankees, and Astros. I bought the factory sets and opened them (you mean...HE OPENED A FACTORY SET??!) just so I could get my hands on the bonus cards and scan them so those who don't open their factory sets could see what they look like. It's been a habit for me since they came out with those 2001 Topps Archives Future Rookie cards. I wanted those cards for my collection, it never mattered if I already completed the base set already. I was willing to spend just for the bonus cards. And from 2002-2005, I did just that. I bought every factory set imaginable just so I could get my hands on these bonus cards.

Okay, back to the point. This year, Topps announced that in all their 2008 Topps Hobby Exclusive Factory sets that these 10 players were going to be included as Rookie Variation cards:

So imagine my surprise (again), when I opened my set, and out came these cards: 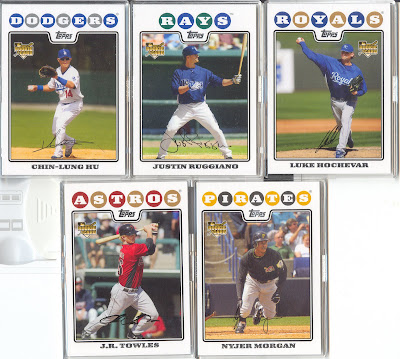 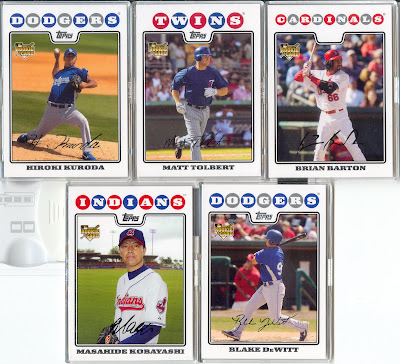 Instead of the ten players prior, I have:

Of the ten players from the sell sheet, only Barton made it into production. Where's Crabbe? Where's Bowker? Heck...where's Longoria???

This is why, again, you never trust a checklist that comes out BEFORE the product does. It is always subject to change. Well, into the collection you go (hauls out really large binder...)

P.S. If anyone needs an complete set (cards are unsearched) of 2008 Topps cards, please let me know. Thanks. jba

That's why I can't trust the card companies to provide me with a correct checklist, even after the product comes out.