Before we begin, I'd like to make a quick response to a comment left by friend of the blog Big Daddy, who asked if there were any variation cards found in the 2008 Topps Factory Sets. He has good reason to ask.

In 2006, Topps had what collectors thought would be an uncorrected error for Pete Mackinin's 2006 Topps card. As you may or may not know, the previous manager, Lloyd McClendon, was relieved of his duties, and Mackinin took over the team on an interim basis. However, when the 2006 Toops set came out, there was Mackinin's name on the banner, but Lloyd McClendon's picture behind it. Uncorrected error right? The answer would be an emphatic no as every 2006 Topps factory set included a corrected card, with Mackinin proudly smiling with his name below. They also corrected pitcher John Koronka's card. He was traded from the Cubs to the Rangers, and while every Koronka card in packs had him with the Cubs (he was wearing their uniform), every card in the factory set had him as a Ranger (now wearing a Rangers uniform).

In 2007, as described in another What??! of the Week post, we had the Rabelo/Butler, Barrett/Buck card switches, along with the Derek Jeter card without the President in the stands and the ghost of Mickey Mantle in the dugout.

After going through every single card, I think I can say with confidence, that there are no variation cards, no gimmick cards, no uncorrected error cards, to be found in the factory sets (at least in the one that I opened. That means that Erik Bedard still has the wrong guy on the card, that there are no cards of Jerry Manuel, Cito Gaston, and Jim Riggleman replacing fired managers Willie Randolph, John Gibbons, nor John McLaren. Each set will come with the regular Red Sox World Series card without Guliani celebrating. Of course, this research was done with one Hobby factory set. (Does anyone want it???). You never know what could show up in later sets.

As promised after capturing the final card in my search for the Infamous Series II Six, I am proud to introduce to you, for the first time ANYWHERE (because I've never seen a picture of all six together on the internet), ALL SIX SHORT PRINTED CARDS FOUND IN PACKS OF 2008 TOPPS SERIES II BASEBALL!!! 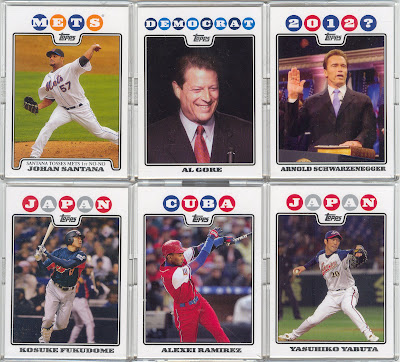 Starting from the top row, it's card #661 Johan Santana, 2008 Presidential Candidate Al Gore, and 2012? Arnold Schwarzanegger (I will never forget how to spell the man's name from now on).

On the bottom row are the three cards that comprise of an unannounced insert set for the World Baseball Classic, featuring Kosuke Fukudome (JPN), Alexei Ramirez (CUB), and Yasuhiko Yabuta (JPN).

Nice to see Topps' demise all in one place I guess.