It's a cold night here as winter has "finally" arrived. But instead of light snowflakes slowly reaching the ground, it's ice. Coming down real fast. It's surprisingly deep out now, but it's so heavy, it would be ridiculous to try and shovel. Snow blowing isn't going to do much either.

So after winding down with a non-alcoholic version of linguine with clam sauce (long story...but the last time I made this at home, it involved way too much white wine in the sauce), now is the perfect opportunity to begin what I hope is a pretty good Pack Break Week.

This Christmas, I received a lot of packs of different products. For tonight's pack break(it would have been a "today's pack break," but you know...work...), why not open the product that started the 2015 baseball card season, Topps Series 1. Seeing all of the images on the screen were nice and all, but it was until I got to see the cards up close that I really started to like the design elements of this set. The colored borders, very light use of foil (only on their logo and the words "Future Star" on those cards that needed it), pictures were great. What was not to love? 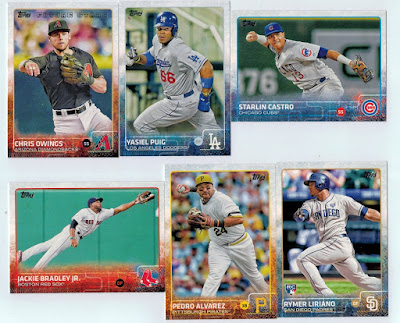 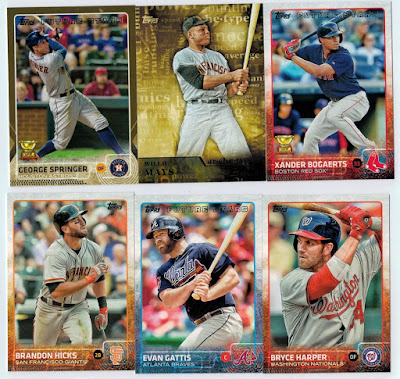 Decent pack for S1. Four Future Stars, two players from 2014's Topps ASRT, and a Topps Gold card!!! You can see the details of the border a lot more on the gold and black parallel cards than you can with the base. Then you have the fact that there's a Cubs card (Castro), and Hobby darlings Yasiel Puig and Bryce Harper? It's a win.

So Pack Break week went off without a hitch. Here's to hoping I can get the rest of these out earlier. I guess better late then never, right? Tomorrow, I'll open the pack of 2015 Topps Gypsy Queen. What's waiting for me inside the pack? Stay tuned and we'll find out together.

JayBee Anama
Posted by James B. Anama at 8:55 PM