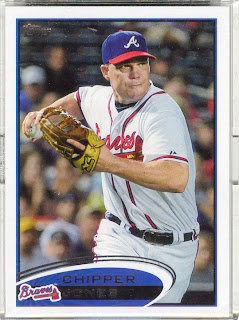 One of the Final Man Candidates on the NL side of the ballot has been named to the 2012 National League All-Star Team.

Matt Kemp was voted by the fans to start the 2012 All-Star Game. However, he has not played since the end of May as he has been on the shelf with a strained left hamstring. So today, it was announced that Ryan Braun, who finished fourth in the fan voting, will now take Kemp's place in the starting lineup.

Taking Kemp's spot on the roster is Chipper Jones of the Atlanta Braves. Jones, who announced that this year will be his last in a MLB uniform, was leading the Final Man balloting as of Tuesday morning. This will be the eighth time he's been named an All-Star. Chipper will be joining fellow Braves All-Stars Dan Uggla and Craig Kimbrel in Kansas City next Tuesday.

Thanks to Jones addition, the leaders in the final man voting are now David Freese of the Cardinals and Yu Darvish of the Rangers. There are still two more days left to vote, so get to it.

JayBee Anama
Posted by James B. Anama at 9:54 PM