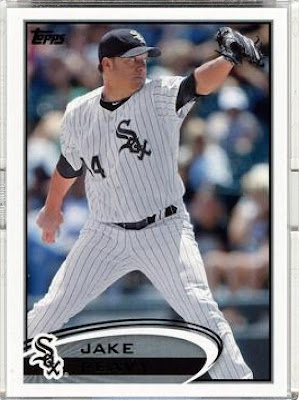 The Angels announced today that C. J. Wilson, who was selected to replace CC Sabathia at the All-Star Game, will pull out of the All-Star Game due to blister problems in his left middle finger.  In his stead, manager Ron Washington selected Jake Peavy of the Chicago White Sox to take his spot on the AL All-Star Team roster.

Peavy has had a comeback season of sorts in 2012.  Traded to Chicago in 2009, he had been battling injury issues and other issues that made many in the city question why he was sent here.  But this year, he is finally showing what the Sox was supposed to be getting, a power pitcher who can dominate a ball game.

Jake now joins fellow Pale Hose players Paul Konerko, Adam Dunn, and Chris Sale on the All-Star Team.  With four players from the South Side, and two Northsiders going to KC, Chicago will be well represented at the ASG.

PS:  Please note that all but one of the replacements named since Sunday's big announcement were from the Final Man Ballot (Jones, Bourn, Harper, and now Peavy).  jba
Posted by James B. Anama at 10:59 PM

That's too bad. I was hoping Wash would make CJ pitch all 9 innings. Ha.