No, I'm not giving up on this dog and pony show of a blog. It may seem that I've not posted much, but it doesn't mean that I'm not anticipating 2012 Topps Series 2 coming out in a couple of weeks. And there is a possibility of doing another Pack Break Week featuring 2012 Topps Gypsy Queen and the new 2012 Topps Archives product (plus whatever extra packs I can find at the nearby Target). 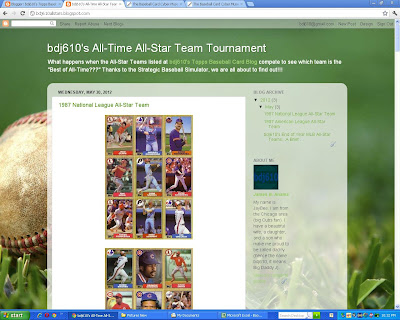 Anyway. Remember how I mentioned that through the years at the end of each season (at least the last 25) that I would create a pair of End-of-the-Year All-Star Teams (one for the National League, one for the American League)? Remember how I used the Strategic Baseball Simulator (or SBS) to fulfill my childhood fantasies of determining which of the two teams would win in a head-to-head competition?

Well it's time to find out, taking a line from Iron Chef, "Which All-Star Team will reign supreme??!" I would like to know:

I created a new blog on Wednesday, May 30, 2012, called bdj610's All-Time All-Star Team Tournament (http://bdj610allstars.blogspot.com/).  Thanks to the SBS, I am going to reintroduce 24 pairs of All-Star Teams (from 1987 through 2010) and put them through head-to-head simulations to determine which of my imagined rosters is the best of all time.  All 48 teams will compete against each other (NL vs NL, AL vs AL) in a 162-game season.  There will be four divisions of six teams per league.  At the end of the 162 game season, the top four teams in each division will advance to a head-to-head tournament that will ultimately end with one team from the NL taking on one team from the AL in a final seven series simulation (each 10,000 games) to determine an ultimate winner.

Through the use of the Baseball Card Cyber Museum (thanks John McAnally), I will introduce every player on each of the teams through their proper year's Topps card.  If you read any of my simulation results, you'd know that I used the following year's cards to represent the previous year's teams (for example, cards from the 1991 Topps set were used to introduce players from my 1990 All-Star Teams).  This time, each team will get their own post and as an example, the 1987 All-Stars will be introduced with their 1987 Topps (or Topps Traded cards).  Speaking of the 1987 All-Star Teams, you can click on these links to see cards of all 72 players and managers from the my 1987 National League and American League squads.

Read the introduction if you have the time.  The madness is explained in a bit better detail there.

I do hope to get this done by the end of the 2012 MLB season.  Join me on this latest journey as I indulge in what started as a childhood fantasy that has now, thanks to the internet, become reality.  May the best team win.

The BCCM is awesome. I use it in opera on my ipod touch and it works just like an app.