All this hubbub about Skip Schumaker's 2012 Topps card. Have you seen it??? Have you seen prices for it???
That's nuts (no pun intended)!!!

What's the fascination with a card of Schumaker's right foot??! 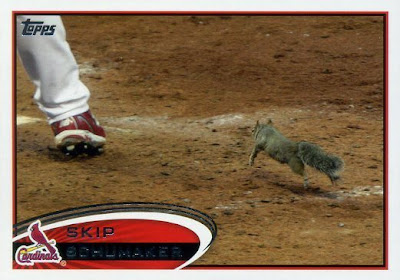 One of Topps' SP's that can be found in packs of 2012 Topps Series 1 includes the Cardinal's Rally Squirrel. Some may say that this little critter was the reason why the Cardinals won the World Series last year (just like some believe some black cat was the cause of the Cubs' demise in '69...can you imagine if Topps had the foresight to make a card of that darn cat??!)

Reminds me of the hysteria caused by another Sciurus carolinensis.

(Getting ready for Stale Gum to cringe a bit more...)

If you weren't collecting cards in 2007, you may not know that this card exists. For those of us who were opening packs of 2007 Topps Updates and Highlights, there were two SP cards included in the product. The first was an unannounced Rookie card of Red Sox slugger Jacoby Ellsbury (#UH330). That was confusing because the regular #UH330 belonged to Brian Burress of the Orioles. 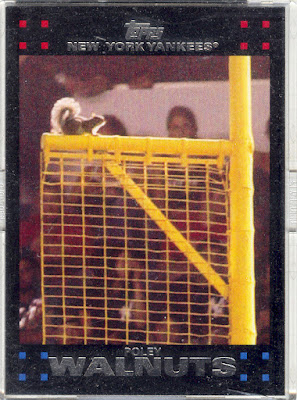 Above was the second card.

Prices for the Rally Squirrel, when the hysteria dies down, will probably fall to Poley prices. But for now, because of how new the product is, and because the rodent is still on everybody's mind, prices are going to remain sky high.

This is one of the many things good for the Hobby. The notoriety this card, just like the others (think Jeter with Mantle and Bush from earlier in the year...2007 as a matter of fact), puts our Hobby in the spotlight and the mainstream media. Yes, people who don't understand what we collect may find it odd, but at least it gets people talking. It makes people curious. It makes people want to see the card for themselves. And who knows? Maybe this card will help snag a few new collectors. Maybe this card will inspire said collectors to creating a blog. A blog about our Hobby. And...

JayBee Anama
Posted by James B. Anama at 6:31 PM

I agree wholeheartedly. Post coming on this stuff tomorrow.

Right on JayBee...you know that if Yahoo has a story about the Schumaker card as a headliner, then the hobby is getting press that it normally would never see.

You dreams have come true, partly. I started my blog today. It's not great, I'm open to suggestions and help. Could I be added to the rolls?
Or if not the rolls, the donuts?