The Gypsy Queen Scheduled to Sail in 2011.

The latest buzz around the Hobby Internet community was the announcement of the Topps Company's latest retro-baseball card product: 2011 Topps Gypsy Queen.

In what appears to be the replacement for this past year's National Chicle or even Topps 206, Gypsy Queen cards were inserts found in packs of cigarettes back in 1887 (N174 for those of you who follow Mr. Burdick's codes), and the photos used were similar to those used of the more familiar Old Judge cards from that same era (both brands were manufactured by Goodwin and Company). Doing a bit of digging (isn't the Internet a wonderful thing???), the Gypsy Queen set consisted of 183 cards (that are known of anyway), in two sizes (2" x 3½" and 1" x 2½") and because the cigarettes were expensive, only the "upper class" could afford them. Because cards like these weren't really actively collected back then, it is a safe bet that many were just tossed aside, which makes the original cards rarer than other tobacco cards (like the Allen & Ginters, the Old Judges, etc). How rare were these cards? Put it this way, even the book Classic Baseball Cards: The Golden Years 1886-1956 doesn't list or has any pictures from this brand of cards.

Now this isn't the first time Topps is utilizing the design. Remember a few years back (2007 to be exact) when Topps' Walmart Exclusive insert set included a bunch of old baseball card designs? There were a couple of Gypsy Queen cards included (Joe Mauer and Dan Uggla). And although the cards from 2007 stayed true to the set's original sepia colored pictures, the 2011 set will utilize color pictures. 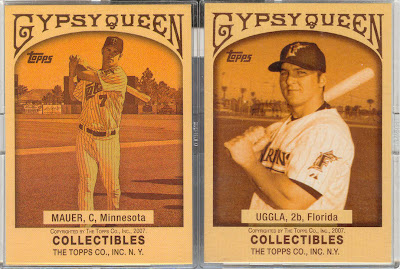 The 2011 Topps Gypsy Queen set will consist of 450 cards, of which 50 will be short-printed variations (there's a big surprise). There are going to be three regular-sized insert sets, and the kicker is that every card (base and inserts) will have their own mini parallel card. The parallel cards will be found one per pack and include hobby-only Leather versions limited to 10, Sepia minis limited to 99, back variants and black-bordered back variants. 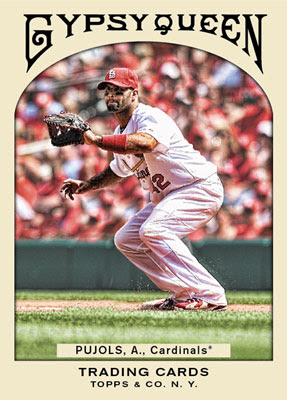 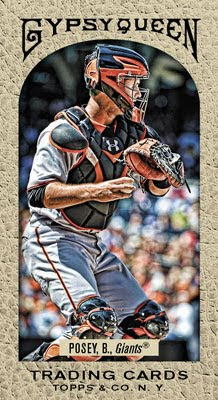 There are also the usual relics, autos, and mini framed cards. As well as something called Stamp Relic cards. All 450 cards (#'d to ten) will feature a stamp that incorporates the player's city or country of origin. 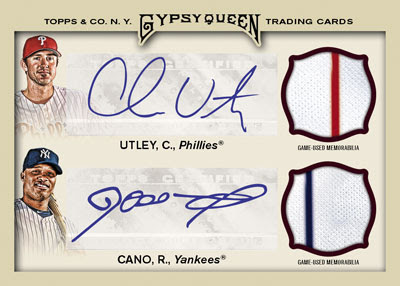 And, the number one source in the hobby has pictures (some which are below...you can catch the other ones on their site). The most unique card I've seen among the samples is this embedded Gypsy Queen gem card, complete with a picture of a "gypsy queen." Hey, if they can get Santa Claus, or even the invisible man on a card, you never know. 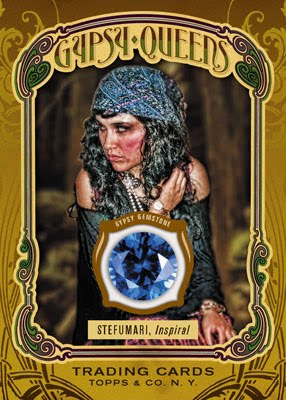 Now personally, I like the retro stuff that Topps, and even that other card company...when they were around, put out in the last ten years. What started with T206, T205, Cracker Jack, Turkey Red, Allen & Ginter, Goodwin Champions, Goudey, Play Ball, and even the National Chicle, the purpose of these cards were not only to put something on the market for set collectors to hunt, but to also expose us to the rich history of the Hobby and the cards that were made before the Shorin brothers came up with their gum. As a student of the Hobby, I really appreciate that. But lately, there's been a bit of ambivalence to these kinds of cards. Why the hostility? Has the craze already played itself out? If it has, why then is Topps still putting these kinds of products out there? Certainly there is a market for it. And there is a wealth of old card products and designs they can use.

Now for those of us who have never seen actual Gypsy Queen cards, one of the best sites I've seen
that has a number of them is here at Baseball Cards Live. A checklist of the 183 known cards can be found here at Vintage Prices. And when sell sheets arrive, I will make sure to scan and post them here on the blog.

Topps Gypsy Queen is the fifth product the company has announced for Major League Baseball (following Series 1, Heritage, Opening Day, and Tribute). More to look forward to in 2011.

JayBee Anama
Posted by James B. Anama at 9:00 PM

Last year we had Heritage and three tobacco sets, none of which were especially inspired.

I loved Allen & Ginter in the beginning, but let's face it - if they didn't put the year on the front of the card, how could you tell what set it came from?

Chicle was a nice idea, but the actual execution was very hit and miss. T-206 should be sent to the recycling bin.

Topps should stick to one tobacco set and Heritage... then maybe the people that like retro wouldn't feel burned out.

I like the Heritage sets, not a big fan of the retro sets. I like the fact that 2011 Topps Heritage is reprinting the 1962 Topps Babe Ruth cards. I would tell Topps, give me more reprints!

What complete Topps retro sets from the past 10 years would you recommend for the Baseball Card Cyber Museum? I'm almost done adding the Heritage sets and already have the T-206 as well.

I also think Topps should have followed up with their Archives(?) project with reprints of all classic sets up through about 1980 or so.