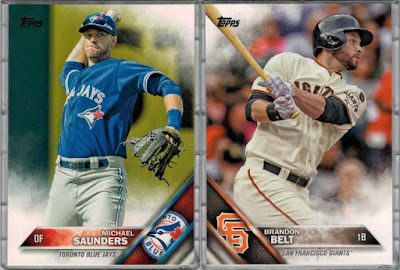 On Tuesday night, after the All-Star rosters were announced, fans were given the opportunity to add two more players to each of the league's All-Star Teams via the Final Man Vote. Seventy-two hours later, millions of votes were tallied. MLB Network even had an actual political analyst discussing up-to-the-minute vote totals and trends. While I have yet to find the complete number of votes tallied this time around, in the end, Michael Saunders of the Blue Jays and Brandon Belt of the Giants were added to their respective All-Star teams after winning the Final Man Vote.

Michael Saunders, aka "Captain Canada", had the support of almost the entire country (guess which one), and by the end of the day, earned an astounding 17.7 million votes, earning more votes than outfielder George Springer of the Astros, second baseman Ian Kinsler of the Tigers, second baseman Dustin Pedroia of the Red Sox, and third baseman Evan Longoria of the Rays.

Going into Friday morning, Brandon Belt was still in second place in the five-man NL ballot. But when the final votes were counted, his 10.4 million votes were more than enough to hold off the rest of the field, including Pirates outfielder Starling Marte, rookie sensation Trevor Story of the Rockies, the Diamondbacks' Jake Lamb, and perennial All-Star Ryan Braun of the Brewers.

Saunders, a first-time All-Star, is the fourth Blue Jay player named to this year's AL All-Star Team and the second in four years to win the Final Man Ballot (Steve Delabar-2013). He makes the trip to San Diego with fellow Jays Josh Donaldson, Edwin Encarnacion, and Marco Estrada.

Belt, also a first-time All-Star, is the first Giants player to win the Final Man Ballot and the fourth Giant making the trip south to Petco Park along with Buster Posey, Johnny Cueto, and Madison Bumgarner.