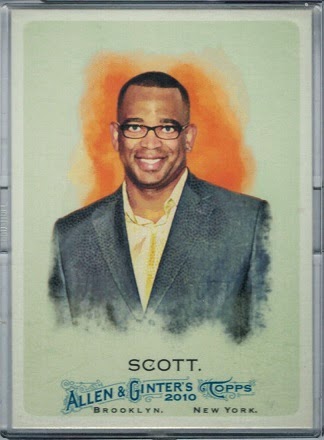 It was just before 10:00 CST this morning, and I was sitting at the social hall of our church when I first saw the news that Stuart Scott, who appeared on many of ESPN's shows, from SportsCenter to the NFL and NBA pre-game festivities, passed away. He was just 49 years old.

Back when I had a lot of free time on my hands, before heading off to classes (probably why I was late to many of said classes), I'd tune in to the SportsCenter replays that would air repeatedly from I think 6 in the morning to 12 noon. The show would repeat every hour, and as I prepared for the start of my day, I always made sure to have it on. And many of those shows, when the duo of Dan Patrick and Keith Olbermann were not on the air the night before, were hosted by Rich Eisen and Stuart Scott. Even after going over the highlights of another Cubs defeat (and there sure were many in the mid-90's), there never seemed to be a reason to change the station. The chemistry they had on the air was excellent, like watching two guys discussing sports at the bar or in the living room. Even watching the highlights of a Pirates-Mets game were interesting thanks to the 1-A team.

Scott had his own set of catchphrases (and during this time, what SportsCenter anchor DIDN'T have them), but they were only used to emphasize what we were watching. Even when it stopped feeling spontaneous, you can't help watching an amazing play and thinking of those same phrases in your head.
And so much more.

Many tributes have been made to the man who, although didn't revolutionize sports reporting, brought it to the masses in a way that we all could understand, and appreciate.

I will admit that I stopped watching the Big Show after many of the big players left. Olbermann, then Eisen, Patrick, even Kenny Mayne. But Stuart Scott stayed on, and in his 21-plus years with the company, helped ESPN evolve to the Worldwide Leader, not just on TV, but in other media (print, online). Even when working on ABC, when he was on, there was not a wasted word spoken on screen by the man.

I knew that he was battling cancer, but not realized that he had overcome it, only for it to come back. And after watching the tributes, and even his ESPY speech last year, he has become more than an inspiration to a generation or more of up-and-coming broadcasters, writers, sports junkies, but to many who are still battling. The line that stands out the most from his speech is one that should become a battle cry...no...THE BATTLE CRY for cancer patients, survivors, and their families:

"When you die, it does not mean that you lose to cancer. You beat cancer by how you live, why you live, and in the manner in which you live. So live. Live. Fight like hell. And when you get too tired to fight, lay down and rest and let somebody else fight for you."

I have watched many tributes to Scott. But this was the best one, I think:

My condolences go out to his family, to ESPN, and to all who can say that somehow, in some way, that Stuart Scott was a part of their daily lives, even if it was only for an instant.

I didn't see that - saw a few on ESPN but not Eisen's on NFLN. Glad you posted it. Eisen said it about as well as you can.