On January 2, defgav, the guy who runs the Baseball Card Breakdown blog brought up a, well, not so necessarily new concept for collectors to do in 2015, but it's something that has gotten many of the Hobby Blogging Community together on their sites and on Twitter (I'm at @bdj610 if you want to follow) abuzz.

This isn't something new. Bob Costas has been known for carrying a Mickey Mantle card in his wallet wherever he goes. By now, unless he's replaced it over the years (and I've heard people have been giving him copies of that card) it has to be damaged to smithereens.

For the life of me, I can't remember for the life of me who did this, but somebody took a stack of cards, and carried them with him in his pocket for a full year, and then compared what they looked like at the beginning of the experiment to the end (the results weren't pretty).

UPDATE: Thank you to J. Meeks, the guy who runs My Cardboard Habit. It looks like Mark Aubrey, the guy who ran Mark's Ephemera (he's on a break right now...) was the one who pondered,

"What if I took 20 sports cards and treated them like I might have when I was in elementary school for the summer?"

The results are here. Viewer's discretion is advised (if looking at this stuff will make you wince).

Now, this is what the guy at BCB proposed:

"The idea is to pick a junk dupe of a card you like (but are willing to "sacrifice") and carry it around in your wallet for a full year, occasionally taking pictures of it on your travels or wherever, and share them on your blog. Sort of like the Cards in Odd Places feature I've done a couple times.

"It should be a card that makes you smile every time you see it, since you'll probably be seeing a lot of it. If size/weight is a concern, consider choosing a mini."

Now when I worked for my previous employers, I was given a badge and a lanyard with one of those electronic key things to hang around my neck. Now, because the badge would always twirl, I thought it would be a good idea to put a baseball card behind my badge. Just for fun. I learned that I couldn't fit a regular 2½ by 3½ card in the plastic pocket that held the badge and key, so I picked a mini card from Allen & Ginter's...specifically: 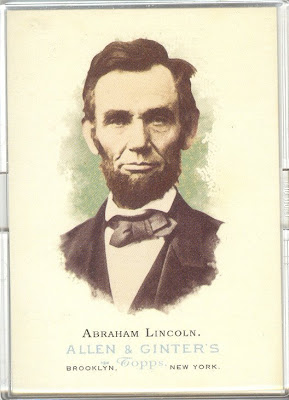 Okay, imagine the mini version of this card in a mini card penny sleeve and top-loader, and you get the idea.

After one year or so of that, I had this card behind my badge until they closed the place: 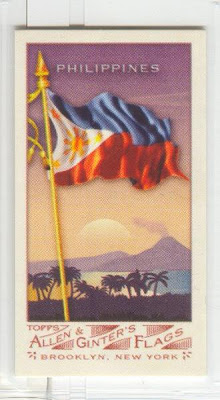 Now, while both cards were protected from being folded, wear, or Dinged Corners (I miss Patricia and Lucy), the holder did collect a lot of dust, crumbs (I worked for a food company), and other foreign objects. The cards did get hit and if one were to look closely at the cards themselves (not the pictures above), you could see tiny divots where the some of these things stuck. Eww.

So back to the point. What card can I put in my wallet for an entire year, and then occasionally take a picture of it to share on this humble, little blog?

It is supposed to make me smile when I see it (because supposedly, I'd be seeing it a lot). Should I use an older card from the junk wax era? Should it be a more modern card with the new card stock? Decisions, decisions.

If I could, I'd try and find that Sparky Anderson card from 1988 Topps that's so worn out it looks like it was placed in a wallet for decades.

Sorry Sparky. (Note that this is not the actual card...the real card is buried...I think, in a box in the basement).

Should it be a mini card like the Lincoln or the Philippines flag? I don't know, unless I have the top loader, I'd rather not.

Should I even use, gasp, a card from another company?

I know that the card I'm going to stick in my wallet will have to be of a Cub. But which one? Should I go with "childhood" (Sandberg, Grace, Dawson), or "adult" (Lee, Ramirez, Wood), or current (Castro, Rizzo)?

While I didn't find the card of the player I wanted, I did find a good one here. 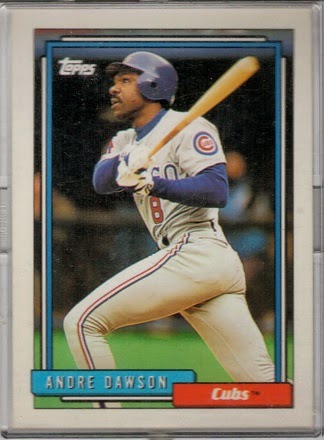 So what I'll do is at least once a month, I will take a scan of the card, and compare it to the image above and see how it survives being carried around in my wallet. Hey, it looks nice. Now. At the end of the year? We'll see.

Mark, of Mark's Ephemera, is the gentleman who carried the stack of cards in his pocket. If you're anything like me, not knowing would drive you a little batty, so I thought I would help!

Yeah, that's a nice card. Thanks for getting onboard!