At my age, I really don't ask for much when it comes to Christmas gifts (if at all...nobody asks). Anything will do for me now. In the last few years, however, I've had to re-think that philosophy.

A couple of years ago, I received a Magic 8-Ball for Christmas. I was gracious upon receiving it and if I can find it, will put it on the Bay...eventually.

Last year, along with gloves that didn't fit, one of the gifts I received a DVD about bartending. With me looking for work, I thought, why not. I don't really drink, but always wanted to learn.

This year, I actually received something that I could use. A notepad for my little office. I was happy with this one as I could now use the notebook instead of scrambling to find a piece of paper to write things down. My younger siblings-in-law pooled some funds together to get their married siblings Google Chromecast devices. These are the things you plug into the television and then you can link it to the computer or cell phones to watch whatever it is on the screen on the TV. It's a really great thing. I'd love to use it.

The problem? We don't have a TV that can use this. So, either I re-gift, beg one of my sibs for a TV, or trade it to one of my in-laws who could actually use it. Options, options, options.

This year, I've decided that all I want for Christmas is a 5-inch D-ring (or flat ring) binder and a box of Ultra-Pro Platinum 9-pocket pages. That's it. That's all I need. Anything else would have been a bonus.

Last week, my son and his classmates made their pilgrimage to the Dollar Tree store to buy presents. Last year, he bought me a coffee mug, which I still use. This year, I requested something different. I wanted baseball cards.

You see, all over Facebook, people were saying that the Dollar Tree stores have been selling packs of baseball cards for a penny. That's right, one cent. And many of these same people were finding short prints, sometimes SSP's in these packs. Now, let's get something straight here. The packs they sell at the Dollar Tree are just of base cards. No inserts, no relics, no autos. Just 5 base cards in a pack. AT A PENNY! Cards haven't been sold at this low of a price since the 50's.

The problem was that I wasn't sure that the deal was still going on, or that the store near me was even in on the promotion. So just on a whim, I told Taylor I wanted something from Topps. And when he came home with the gifts wrapped, I could tell that he only bought one pack for me. That's fine, I thought. The sale must be over.

Today, I opened my pack of 2013 Topps Series 1 cards. I'll get to what was in the pack in a moment. His receipt was included with the pack. Sure enough, the pack of cards cost...ONE PENNY!!!

That means for a dollar, he could have bought me one hundred packs. But when he went to the register, he didn't notice this. So, he got my present for one penny. Oh, well. At least now I know what I'm going to be doing tomorrow...

Anyway, here are the cards that were included in the pack: 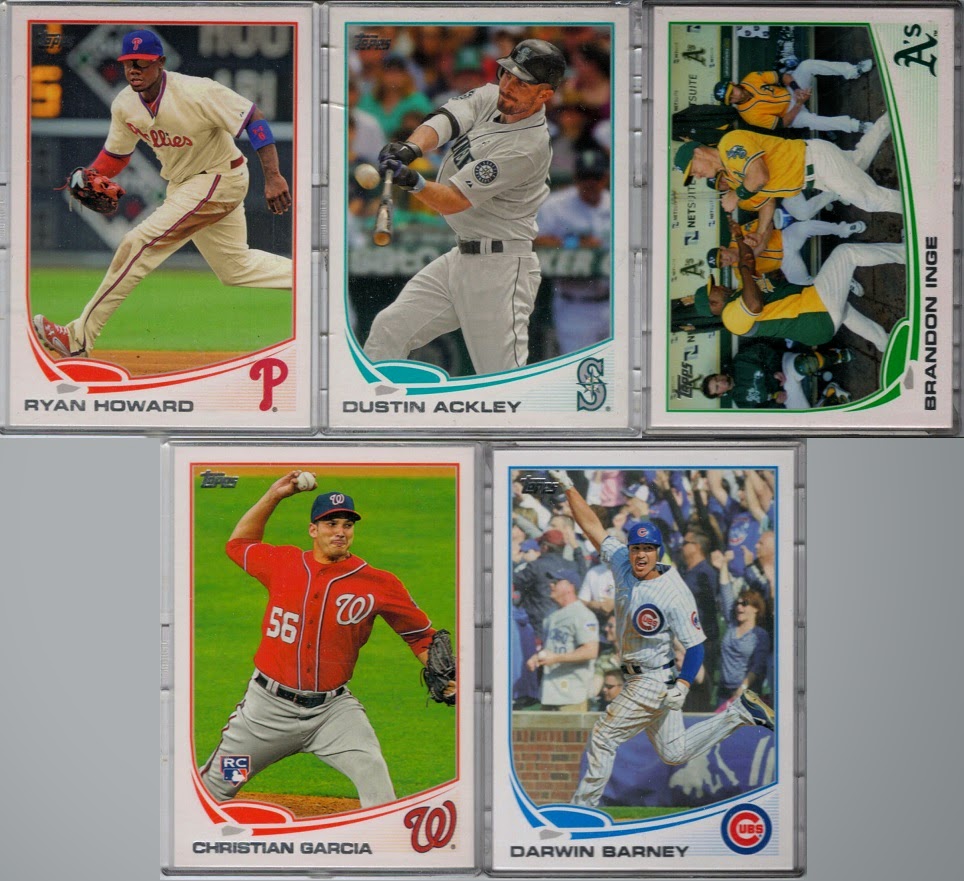 Score one Cubs card. Loved Darwin Barney during his time here. I was hoping that he, Castro, and Rizzo would become the next Dunston-Sandberg-Grace infield of the late '80's through early '90's. But he was traded to the Dodgers last summer. I wish him well.

Getting a Ryan Howard card a few years ago would be a great thing. Now, eh? Ackley is only 26, still has time to develop into the star that the Mariners are hoping for. Like the Inge card, but really, if you didn't know who he was, this card could have been of anybody. Christian Garcia is a Free Agent after the 2014 season.

Love the presents so far. Can't wait to see if there is more to come. Merry Christmas to you and your kin.

Now go back and celebrate with family. I know I will.