Introducing Your 2014 MLB Cy Young Award Winners - Unanimous in the NL, No Longer Anonymous in the AL 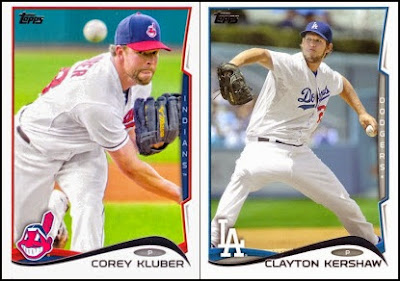 In recent years, Topps has reserved six cards within Series 1 for the AL and NL award winners that are being announced this week. Once again, however, this year's preliminary checklist doesn't specify what numbers are being held for the them. But yesterday, we learned who was named the Cy Young award winners in both the National and American Leagues.

Congratulations to both Max Scherzer of the Detroit Tigers and Clayton Kershaw of the Los Angeles Dodgers for winning the American League and National League Cy Young Awards. While there was no doubt in the NL, the AL margin between first and second place was a mere 10 votes.

On Monday, a Stetson Hatter alum was named the NL Rookie of the Year. Yesterday, another Hatter took home the AL Cy Young award. Kluber, a second-year starter with the Indians, had a very dominant run in 2014. With a record of 18-9, an ERA of 2.44, 269 strikeouts, and a WHIP of 1.095 in 235.2 innngs of work, 17 of the 30 voters picked Corey as their first place choice (for a grand total of 169 points). The Mariners' Felix Hernandez claimed the other 13 first place votes, good for 159 points. Following Kluber and the King were Chris Sale of the White Sox (78 points), Jon Lester of the Athletics (46), last year's Cy Young winner Max Scherzer of the Tigers (32), David Price of the Tigers (16), Phil Hughes of the Twins (6), and Royals relievers Wade Davis (3) and Greg Holland (1).

Kershaw takes home his third Cy Young Award in four years after leading the NL for the third straight year in ERA (a ridiculous 1.77) to go along with a 239 strikeouts, a 16-9 record, a WHIP of 0.915, 3 complete games, and two shutouts. Claiming all 30 first place votes (210 points) Kershaw outpaced the rest of the field of contenders, including finalists Johnny Cueto of the Reds (112 points), Adam Wainwright of the Cardinals  (97), Madison Bumgarner of the Giants (28), Jordan Zimmermann of the Nationals (25), Cole Hamels of the Phillies (17), Zack Greinke of the Dodgers (6), Doug Fister of the Nationals (5), Jake Arrieta of the Cubs (3), Craig Kimbrel of the Braves (3), Stephen Strasburg of the Nationals (3), and Henderson Alvarez of the Marlins (1).

The fun concludes on Thursday when the Most Valuable Players in both leagues are announced. Let the debates continue. Did your guy win???