After I posted my End-of-the-Year All-Star Teams last month, I gave whatever readers I have left the opportunity to vote one of the players I had to leave off onto the teams. Called the "HBC (Hobby Blogging Community's) Final Man," I picked five players that I thought could have been on either the AL or NL team, but because of roster space and other factors, they did not make it initially.

This was the first time I have done asked the public to help me with these "fantasy" teams since I started doing this back in 1989. I also said that if that if there was enough interest in this, I'd consider running a final man ballot every year. Turnout, considering how often I have posted these last two years, was surprisingly good. So I will do this next year too.

There were ten players I selected for the initial final ballot. Five players per league. Readers who voted were allowed to vote for one player per league. Voting ran for two weeks. Those players were:

Now for the results: 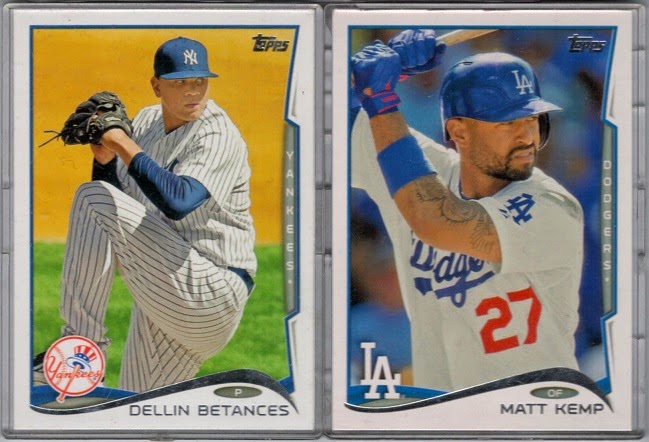 From the very beginning, both Dellin Betances of the Yankees and Matt Kemp of the Dodgers led their respective ballots.

By the time it ended, Betances earned 16 of the 40 votes cast, followed by Ortiz (9), Kinsler (8), Carter (6), and Chen of the Orioles (1). Betances becomes the fourth Yankees player added to the 2014 AL squad, joining Jacoby Ellsbury, Brian McCann, and David Robertson.

When SBS Baseball comes out with the team rosters from the 2014 campaign, I will go ahead and add Betances and Kemp to the rest of the rosters. This will be the first time ever that I will have one more pitcher on one side and another batter on the other side. Should be interesting to see which team has the advantage.

Thank you very much to everyone who voted.