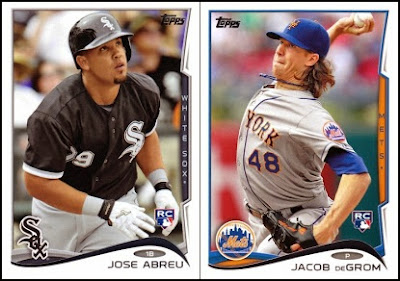 In recent years, Topps has reserved six cards within Series 1 for the AL and NL award winners that are being announced this week. Once again, however, this year's preliminary checklist doesn't specify what numbers are being held for the them.  But yesterday, we learned who was named the Rookies of the Year in both the National and American Leagues.

Congratulations to both Jacob deGrom of the New York Mets and Jose Abreu of the Chicago White Sox for winning the National League and American League Rookies of the Year Awards. This year, MLB decided to announce the top three finalists for each of the awards. While there certainly more players in the running, announcing the top three made for interesting debate.

Jose Abreu, the White Sox' first baseman of the future, had a breakout rookie season that could only be described as dominant. He was among the top 5 players in the AL in batting average (0.317), home runs (36), and rbi's (107), was named to the All-Star Team, and won the Silver Slugger Award for first basemen. He was everything the Southsiders were hoping for and more. Abreu also received all 30 first place votes in the AL ROY balloting, thus earning the maximum 150 points possible. The rest of the field included Angels pitcher Matt Shoemaker (40 points, 12 second place votes), Yankees reliever Dellin Betances (27, 7), Collin McHugh of the Astros (21, 6), Masahiro Tanaka of the Yankees (16, 3), Yordano Ventura of the Royals (9, 1), Danny Santana of the Twins (3, 1), Nick Castellanos of the Tigers (1), Brock Holt of the Red Sox (1), Jake Odorozzi of the Rays (1), and George Springer of the Astros (1).

Abreu becomes the fourth Cuban-born player, the sixth White Sox player, and the ninth player to be named Rookie of the Year. deGrom is now the fifth Mets player and the first starting pitcher with less than 10 wins to earn the award.