Sorry for the lack of posts, especially during Topps Series 2 season. I've been so busy with my filling out my latest project, bdj610's All-Time All-Star Team Tournament that I haven't been doing much else online.

Am I excited that Series 2 is out?  Absolutely.

Am I thrilled that there finally is an updated checklist?  Yes!!!

Am I thrilled that Topps put back the HOF/legends SP's in series 2?  You bet!!!  (will get to this in a minute)

Today would have been the perfect day to run to Target and grab a few packs, just so that I can at least join in the chase for that elusive #661 (the one that if I don't find, I'll wait patiently until factory sets arrive...I'm in no rush).  But alas, bills had to be paid (groan), and with this weekend being my daughter's dance recital, any extra funds will be going to all that goes with her show (food, tickets, after-show parties...)

Yes, money is tight, but it doesn't mean I can't be excited about Series 2.  If you didn't know by now, not including the Harper SP, there are 25 other short printed celebration/fun with mascots/pied-in-the-face cards that not only includes players whose regular cards are in series 2, but now also add onto the fun in series 1.  To wit, Derek Jeter's #30 card now not only shows him in a vertical leap that we all know was chosen by that guy who caught the #3000th hit, but now shows him celebrating with his teammates (maybe it was because of said hit...who knows?)  Also, the Rally Squirrel makes another appearance in Series 2, albeit as a stuffed animal instead of live rodent.  Here are the rest of the cards, if you need to know received the treatment.


Had to look it up, but "Beast Mode," according to the Urban Dictionary is "A hype, energetic, outgoing, wilding out state of mind."  If I had to fathom a guess, I would think that means when baseball players, and all athletes for that matter, push themselves further and harder during their workouts than normal, probably as their pre-season or regular season gets closer.  Here are the pics:

On to Series 2 SP's in Series 2 (makes no sense, just typing that for consistency): 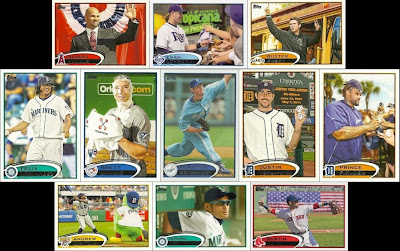 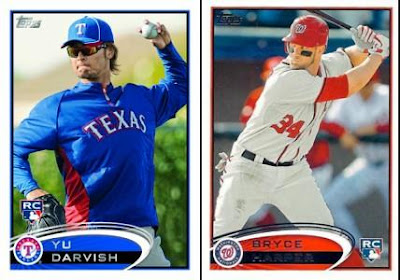 King Felix as Larry Bernandez is a tribute to the Mariners ever popular tickets commercials.  The subplot is that the King wanted to pitch MORE than he would otherwise be allowed to do, so Larry Bernandez tried out for the team.  The marketing stunt proved so successful, hence Bernandez' own bobblehead night.

Now, just like the series 1 variations, I'm not going to be running amok on the Bay looking for them.  I'm more interested in these: 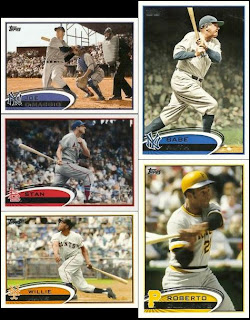 Now that's more like it.  Here are cards I'm going to put on my wantlist.  With only 5 cards (the cream of the crop of HOF's no doubt), this should be an interesting set to go after (among other things).

I will wait patiently on the Bay hoping that master sets will come down in price after the hysteria.  In the mean time, maybe I will run to Target and get at least a couple of packs to tide me over.

JayBee Anama
Posted by James B. Anama at 5:43 PM

HOLY CRAP those last 5 cards you posted are amazing. I must get that Dimaggio.

I like those cards, but I wish they'd make it an insert set, or find a better numbering system. When I come across some 2012 cards a few years from now, I'll have to search out a detailed checklist because, for example, the Jeter card looks pretty ordinary, but is an SP variation, and I won't remember that later on.

So glad to finally see they're doing legends variations for 2012. My question - why not the typical 50-60 instead of just FIVE? Better yet, why doesn't Topps at least issue nine cards so they can present well on a 9 card sleeve sheet? I just don't get why Topps doesn't work on the premise of issuing by multiples of 9 in order to have the collector put into 9-card sheets.