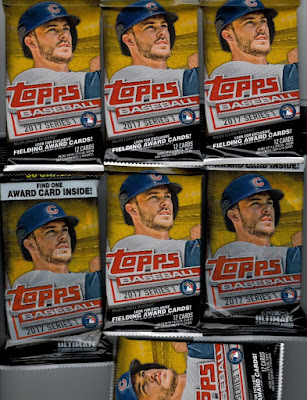 After a week of waiting and watching everyone else enviously opening packs, boxes, and cases full of the stuff, I finally have my hands on some packs of 2017 Topps Series 1. Needless to say, I'm thrilled. I've been dying to see these cards up close and personal, and now I have my chance. 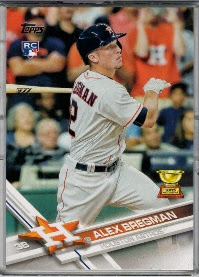 This is a good card to get as the first of the year (last year's was Nick Ahmed of the Diamondbacks). It's a Rookie Card, complete with the MLB RC logo. Bregman was the 3B for the 2016 Topps All-Star Rookie Team. He's expected to do big things for the 'Stros in 2017. He's on an infield that includes Carlos Correa and Jose Altuve. As Harold Reynolds says, "What's not to like? He's tremendous!" (I've been watching waaaay too much Hot Stove on the MLB Network...can baseball start up already??!)

What else showed up on my initial pack of eponymous product?:


Here are some of my thoughts about this first pack of cards:


Overall, it was a good pack. I can't wait to tear into the rest of my haul today (or later today).