Introducing Your 2015 MLB Rookies of the Year - Unanimous in NL, Tighter Race in AL 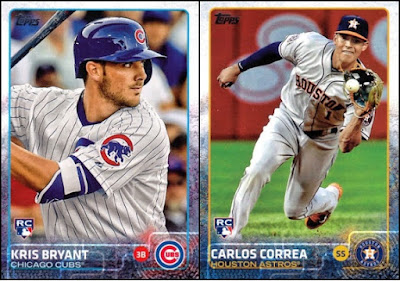 In recent years, Topps has reserved six cards within Series 1 for the AL and NL award winners that are being announced this week. While no preliminary checklist for next year's eponymous set has been released as of Tuesday, November 17, last night, we learned who was named the Rookies of the Year in both the National and American Leagues.

Congratulations to both Kris Bryant of the Chicago Cubs and Carlos Correa of the Houston Astros for winning the National League and American League Rookies of the Year Awards. As was done last year, MLB decided to announce the top three finalists for each of the awards. While there certainly more players in the running, announcing the top three made for interesting debate.

Kris Bryant, who's name was on the lips of EVERY baseball writer, fan, and card collector, not only showed that he was the real deal, but was truly deserving of the words "Future Star." He led all MLB rookies in home runs (26, tied for first), rbi's (99), doubles (31), runs (87), while hitting .275 with an OBP/SLG/OPS line of .369/.488/.857. He was also named to the NL All-Star Team in 2015. On a team of young stars, it is hoped that Bryant will help lead the Cubs to the promised land. He received all 30 first place votes in the NL ROY balloting, thus earning the maximum 150 points possible. The rest of the field included Giants third baseman Matt Duffy (70 points, 22 second place votes), Pirates shortstop Jung Ho Kang (28, 4), Noah Syndergaard of the Mets (16, 3), Justin Bour of the Marlins (4, 1), Joc Pederson of the Dodgers (1), and Stephen Piscotty of the Cardinals (1).

Like Bryant, Carlos Correa of the Astros did not make the Opening Day roster. But once he made his MLB debut on June 8, not only did he become the youngest position player in the majors in 2015, but he also added to what was already a renaissance year for the Astros. Just like the Cubs, the Astros were building for their future. But the future was now for the 'Stros, leading the AL West division for most of the year before managing to earn the second wild card spot in the playoffs. In 99 games, Correa hit 22 home runs, drove in 68 rbi's, stole 14 bases, and hit for a .279 average with a slash line of .345/.512/.857. It was a close race on the AL side though, with Correa taking 17 of the 30 1st place votes (124 total points). Francisco Lindor of the Indians finished in second place in the voting (109 points, 13 first place votes), followed by Miguel Sano of the Twins (20), Roberto Osuna of the Blue Jays 9 (8, 2), Billy Burns of the Athletics (6, 1), Eddie Rosario of the Twins (2), and Delino DeShields of the Rangers - feel old people, he's the son of the Expos All-Star from the 90's - (1).

I don't know if this was answered but have you retired the topps all star rookie contest?