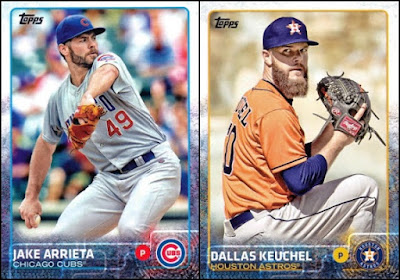 In recent years, Topps has reserved six cards within Series 1 for the AL and NL award winners that are being announced this week. While no preliminary checklist for next year's eponymous set has been released as of Thursday, November 19, last night, we learned who was named the winners of the Cy Young Award in both the National and American Leagues.

Congratulations to both Jake Arrieta of the Chicago Cubs and Dallas Keuchel of the Houston Astros for winning the National League and American League Cy Young Awards. If the teams these aces play for sound familiar, it's because the other day, their teammates were named the NL and AL Rookies of the year.

Any of three dominating pitchers could have easily won the award in the NL. But Jake Arrieta's dominant second half (which included a no-hitter) convinced 17 voters to put him on the top of the list over two Dodger pitchers. With a record of 22-6 record, an ERA of 1.77, 236 strikeouts, and a WHIP of 0.87 in 229 innngs of work, 17 of the 30 voters picked Jake as their first place choice (for a grand total of 169 points). The Dodger duo of Zack Greinke (147 points, 10 first place votes) and defending Cy Young winner Clayton Kershaw (101, 3) finished second and third. Pirates ace Gerrit Cole finished fourth (40 points) followed by Max Scherzer of the Nationals (32), Madison Bumgarner of the Giants (8), last year's NL Rookie of the Year Jacob deGrom of the Mets (7), Pirates closer Mark Melancon (5), and the Cardinals John Lackey (1).

Dallas Keuchel's career year propelled the Astros to their first playoff appearance in more than 10 seasons, their first as a member of the American League. He finished the 2015 campaign with a 20-8 record, a 2.48 ERA, 216 strikeouts and a 1.02 WHIP in 232 innings pitched. No team could beat him at Minute Maid Park, as he won all 15 of his decisions at home. He was on the top of 22 of the 30 voters' ballots, earning a high 186 points. David Price of the Blue Jays finished second in the balloting taking the other 8 first place votes (143 points) while Sonny Gray of the Athletics landed in third place (82 points). The rest of the field included a bevy of All-Star quality pitchers: Chris Sale of the White Sox (30), Chris Archer of the Rays (29) Wade Davis of the Royals (10), Felix Hernandez of the Mariners (9), Collin McHugh of the Astros (5), last year's AL Cy Young winner Corey Kluber of the Indians (4), Marco Estrada of the Blue Jays (3), Yankees closer Andrew Miller (3), Shawn Tolleson of the Rangers (3), Carlos Carrasco of the Indians (2), and Dellin Betances of the Yankees (1).

This is the fifth time a Cubs player won the Cy Young Award (last was Greg Maddux in 1992) and while it's the third time an Astros player has taken home the trophy (Roger Clemens, 2004), it's the first time an Astro has won it in the American League (again, they spent their first 50 years in the NL).

The fun concludes on Thursday when the Most Valuable Players in both leagues are announced. Let the debates continue. Did your guy win???